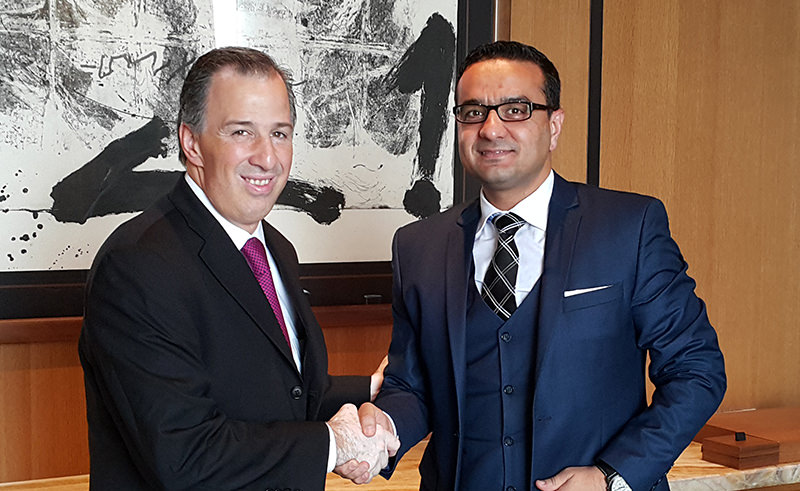 The Mexican minister of foreign affairs has called for reform in the structure of the U.N. Security Council to be more representative and responsive to the needs of the world. President Erdoğan has been the most vocal about the council's policy of having five permanent members with veto power

The Mexican Secretary of Foreign Affairs Jose Antonio Meade Kuribrena has said that the U.N. Security Council (UNSC) should be reformed in a way that makes it more accountable, more democratic and more representative. Speaking to Daily Sabah in an exclusive interview while attending the fifth MIKTA Foreign Ministers Meeting in Seoul, Meade Kuribrena said that MIKTA is a collection of a remarkable group of countries that have clear importance in their region and that Mexico has "very cordial and positive bilateral relations" with other member countries. "We benefit from the ability to look at things from different perspectives and from unique viewpoints by bringing our regions together. Therefore, we can make an important initiative with a group of countries that seems interesting. It allows us to enhance bilateral relations by creating the possibility to discuss among ourselves different state issues," he said.

Responding to a question about the future of MIKTA, Meade Kuribrena said that they would like to maintain MIKTA as an informal space for dialogue. "These are the economies and countries that are between the 13th and 17th biggest economies in the world, and they can bring their own perspective to the table, as well as their regional importance and become part of global challenges and global solutions. We are able to get together and discuss all of the solutions in and of themselves by leveling it off. I think it should be kept informal," he said.

Touching on Mexico's stance on reforming the UNSC, he underlined that MIKTA countries Turkey and Mexico, as well as Indonesia and Korea, share the same stance on the issue and that these countries are part of a movement called United for Consensus.

"This is a movement that believes that the U.N. Security Council should be reformed in a way that is more accountable, more democratic and more representative. We believe that this campaign can go by ensuring there are no more permanent members and instead create a different category within the UNSC." Expanding further on the topic of reform in the UNSC, he suggested that UNSC members should be elected for longer periods but not as permanent members. "Rather, a figure that is there for [an undetermined amount of] years that can be re-elected. Within the fact that they could be re-elected and have four more years makes them more responsive to the needs of the region, makes the council more functional and means they would not be replicating the same elements that are present in the security council that, in our view, makes it less responsive to the tackles and challenges that the council faces," he said.

Underlining that there is ongoing, fruitful cooperation between Turkey and Mexico as part of the G20, he also expressed his support for Turkey's priorities during its G20 presidency. "We think that Turkey's G20 agenda is a really good one with a focus on implementation, on inclusiveness, on investment. It is something that would benefit not only the G20 membership but would generate a positive environment to recuperating relations for growth in the future," he said. He also emphasized that in the last couple of years Turkey and Mexico have strengthened the legal architecture of their relationship to be able to provide a higher degree of support for their ambitions. He also said that having close contact with a country that has global significance like Turkey is very beneficial for Mexico. "Turkey has a very similar GDP per capita as Mexico, that has a very similar democratic structure and that has been very successful in transforming itself and it is an exporting and manufacturing power now. So, for all these reasons, it makes a lot of sense for us to strengthen the architecture and ambition of our political dialogue. All of which we have been doing in the last couple of years, that has been reinforced by a mutual belonging to not just the G20 and the OECD [Organisation for Economic Co-operation and Development], but also MIKTA," he said.

Answering a question about what Turkey can learn from Mexico's presidential system experience within the context of the ongoing discussion in Turkey about switching to a presidential system from the parliamentary system, he said that the Mexican presidential system has been successful in making their country construct an environment that is "conducive to peace, to inclusiveness, to prosperity" and to allow them to play a more relevant role within the global economy. "I think each country, of course, should be able to define itself and its governance whether it feels it is more conducive to long-term success. But I think that the Mexican experience shows a way of doing politics and has helped with the generosity from different political parties. The leadership that President Enrique Nieto has provided has helped democracy function and has provided the type of reforms the country needs," he said.
Last Update: May 26, 2015 8:17 am
RELATED TOPICS