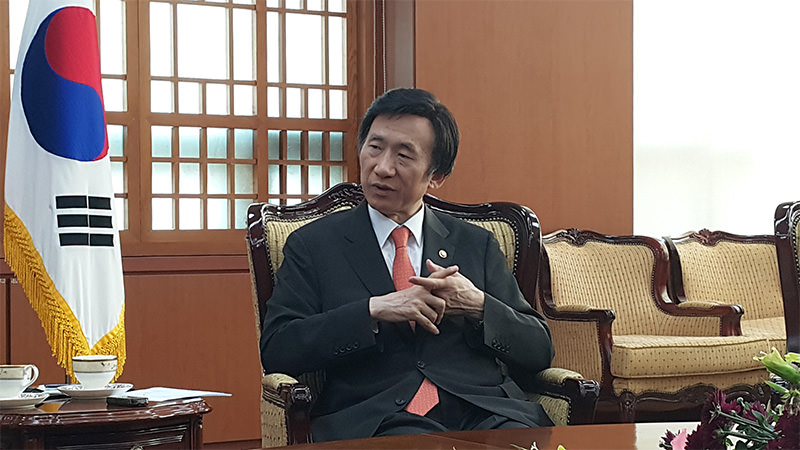 by Ali Ünal May 26, 2015 12:00 am
South Korean Minister of Foreign Affairs Yun Byung-se said MIKTA is a group of cross-regime middle powers, a new model of middle-power cooperation and serves to generate fresh impetus for global governance. Speaking to Daily Sabah in an exclusive interview while hosting the fifth MIKTA Foreign Ministers Meeting in Seoul, Yun said that MIKTA, which brings together key middle-power countries that are able to play a bridging role between advanced and developing countries, will seek practical and innovative solutions to global challenges and lay the foundation for cooperation to promote global governance reform. ''The members of MIKTA have been sharing views on major regional issues such as the nuclear programs of Iran and North Korea, Syria, and Ukraine – issues in the regions of MIKTA members – as well as global issues, and calling for attention and action in unison,'' he said.

Touching on South Korea's stance on U.N. Security Council (UNSC) reform, which Turkey also has advocated for, Yun said that South Korea is of the view that it should be based on the principles of better democracy, accountability, representativeness and efficiency. ''In this regard, we support increasing the number of non-permanent seats won through periodic elections,'' he said, ''The Republic of Korea holds the view that the U.N. Security Council needs to be reformed in a way that reflects the increase in U.N. membership and the evolving international order over the years. Given that UNSC reform is an important issue that will have considerable influence on the international order, it is appropriate that the reform should receive the widest possible political acceptance among member states.''

Praising Turkey's performance in G20 presidency so far, Yun emphasized that Turkey has led the preparations for this year's G20 summit under a distinct theme. ''It highlights the three 'I's' " – inclusiveness, implementation and investment for growth – to ensure "inclusive and robust growth through collective action. I am confident that these three 'I's' put forth by Turkey are highly relevant and timely. They provide right directions for the G20 in leading global growth and enhancing the credibility of the G20 in the international arena amid the slow growth of the global economy and the income inequality issue facing the global community,'' he said.

Turkey and South Korea enjoy strong relations since Turkey's participation in U.N. forces throughout the Korean War. More importantly, despite their geographic distance the two countries continues all-round cooperation and partnership in a wide range of areas. In particular, the bilateral trade volume has constantly increased, reaching $7 billion last year, a comprehensive and full-fledged free trade agreement was signed between the two countries and more than 100 South Korean companies are doing business in Turkey. Furthermore, there are 21 direct flights between Incheon and Istanbul per week and more than 250,000 Koreans visit Turkey every year. Respecting the bilateral relations, Yun said that South Korea and Turkey have huge potential for further growth and development in a wide range of areas.

''Considering the size of our economies, trade and populations, I am confident that our two countries have a very high potential for further cooperation. I sincerely hope that our bilateral relationship will expand beyond the traditional cooperation fields such as trade and investment to include more diverse areas such as energy and infrastructure construction,'' he said.

Yun also said that there would be future cooperation between Turkish and South Korean companies, especially in the energy sector. ''I understand that Turkey is now expanding its investment in the energy sector from a long-term perspective with an aim to ensure a stable energy supply and demand by reducing shortages of electricity and dependence on energy imports. I believe that the accumulated experience and capability of South Korean companies can make meaningful contributions to enhancing Turkey's energy security in the future,'' he said.

Concerning what Turkey could learn from South Korea's experience to avoid the middle-income trap, Yun stressed that South Korea passed that stage and is now marching toward a second miracle based on a new economic framework called the "creative economy" in which innovation and human creativity are the key drivers for economic growth. ''I sincerely hope that South Korea's experiences and policies can serve as a good reference for Turkey in overcoming any possible difficulties in the process of economic development and creating new growth engines in the future,'' he said.
Last Update: May 27, 2015 10:41 am
RELATED TOPICS