Turkey voices support for Cyprus solution based on UN framework 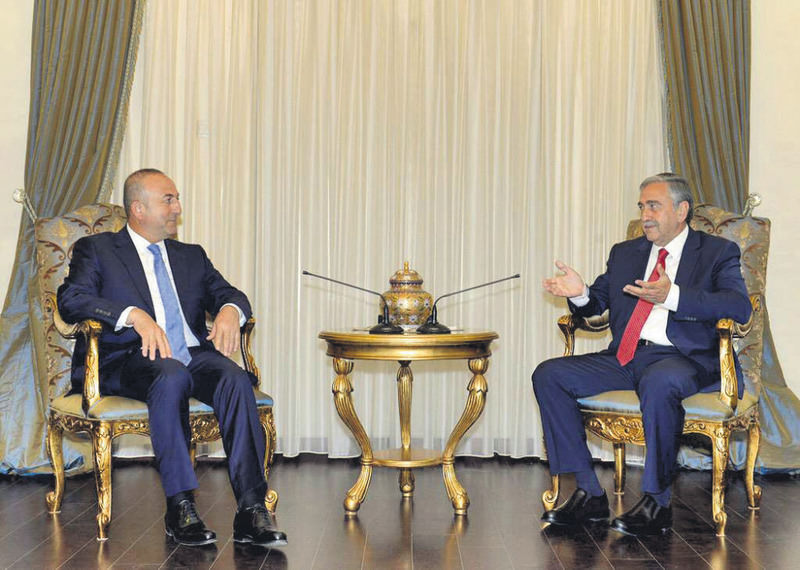 As President Recep Tayyip Erdoğan underlines that no concessions will be made on Turkey's policy concerning Turkish Cyprus, Foreign Minister Çavuşoğlu and Turkish Cypriot President Akıncı meet in Turkish Cyprus, where they discussed the recent developments in the peace talks to reunify the divided island

Foreign Minister Mevlüt Çavuşoğlu traveled to Turkish Cyprus on Tuesday to officially meet with recently elected Turkish Cypriot President Mustafa Akıncı. Following the meeting, which was closed to the media, the two moved on to a working dinner with the delegation. In addition, Çavuşoğlu continued his official visit meeting with the speaker of parliament, Sibel Siber, and Turkish Cypriot Prime Minister Özkan Yorgancıoğlu separately to discuss recent developments regarding the resolution talks.

As political tensions in the long-divided island have eased since the fully-fledged round of peace talks initiated by both sides on May 15, the next session of which is scheduled for Thursday, President Recep Tayyip Erdoğan underlined on Monday that no concessions will be made on Turkey's policy concerning Turkish Cypriots. Prior to travelling to Turkish Cyprus, Çavuşoğlu also met and talked with Turkish Cypriot Minister of Foreign Affairs Özdil Nami and Greek Cypriot negotiator Andreas Mavroyiannis for nearly four hours. While there was no press release following the meeting, Nami and Mavroyiannis are expected to meet again with the attendance of U.N. Special Adviser for Cyprus Espen Barth Eide.

Although the image of the leaders of Greek and Turkish Cyprus strolling through Nicosia on Saturday and drinking coffee together, demonstrating their intent on improving relations on the divided island, has raised hopes for the success of the peace talks, the amount of energy resources Cyprus has is unclear. In this regard, Erdoğan said on Monday: "It is not possible for us to make any concessions in our policy regarding Turkish Cyprus and the island's energy resources."The Foreign Ministry has often underlined the significance of the talks and also said that there are expectations that "a fair, lasting and comprehensive" deal will be reached this year. Additionally, Foreign Ministry spokesman Tanju Bilgiç has also emphasized on numerous occasions that the priority is a solution in which the political equality of Turkish Cypriots is guaranteed, and added: "We want this issue to be resolved as soon as possible within the U.N. framework of negotiations."

Negotiations between Turkish and Greek Cyprus resumed in February 2013 after a two-year hiatus, but Greek Cyprus suspended negotiations after Turkey sent a hydrocarbon exploration vessel to Greek Cyprus' southern coast in October of last year. Turkey later recalled the ship. Turkey is the only nation to recognize Turkish Cyprus, while the majority of the international community recognizes Greek Cyprus, which is a member of the EU. Turkey applied for EU membership in 1987, but the Cyprus issue remains a major obstacle in Turkey's bid to join the 28-country bloc.
Last Update: May 26, 2015 11:13 pm
RELATED TOPICS