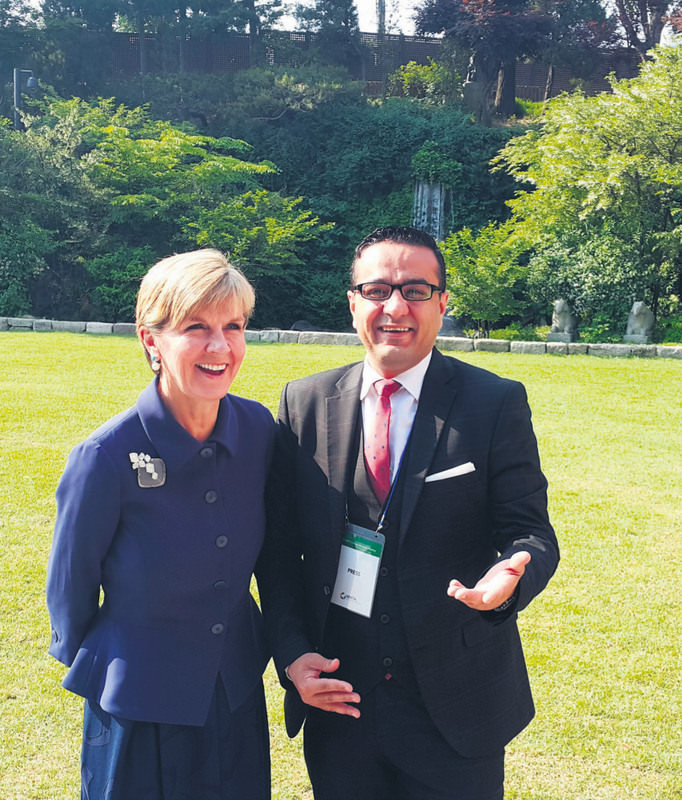 by Ali Ünal May 28, 2015 12:00 am
Australian Minister for Foreign Affairs Julie Bishop said that Australia sees Turkey as an important partner in global security and also a crucial ally in the international community's efforts to combat the Islamic State of Iraq and al-Sham (ISIS) in Iraq and Syria.

Speaking to Daily Sabah in an exclusive interview while attending the fifth MIKTA Foreign Ministers Meeting in Seoul last week, Bishop said that MIKTA countries have serious economic powers that play a pivotal and strategic role in our respective regions.

"We share a capacity to pursue our interests that is not available to smaller players by using our seats in global governance structures and by making use of our respective extensive regional networks," she said. Despite MIKTA being a newly established consultative forum and informal platform, she underlined that MIKTA has various strengths and diversity. "MIKTA's diversity is both the hallmark of the grouping and a major source of strength – it gives us an opportunity to build consensus across very different constituencies, and when we speak with a united voice, we are more likely to be heard. The small size and informality of the group means that MIKTA is a useful and nimble mechanism for members to consult," she said.

Commenting on Turkey's significance in world politics, she said that Australia sees Turkey as an important partner in global security. "As a member of NATO, Turkey is a significant contributor to operations in Afghanistan and is also a crucial ally in the international community's efforts to combat [ISIS] in Iraq and Syria."

Regarding the ongoing cooperation between the two countries, Bishop said that Australia and Turkey share a strong interest in ensuring the U.N. Security Council effectively fulfills its mandate in the maintenance of peace and security. "We want to ensure the council is able to act decisively in response to global threats, including terrorism. We are working constructively on proposals to ensure the council reflects contemporary geopolitical realities. This includes increased representation for Asia and the Pacific, Africa and Latin America. Increased transparency, consultation and implementation monitoring are also needed," she said.

Touching on the cooperation between the two countries in the G20, Bishop said that Australia valued its close cooperation with Turkey as a member during the country's presidency of the G20 in 2014, and they are pleased to continue this as Turkey holds the presidency this year. "We welcome Turkey's focus on the three 'I's' of inclusiveness, implementation and investment. We particularly welcome Turkey's focus this year on integrating low-income and developing countries into the world economy through concrete and growth-oriented actions," she said.

Speaking about Australia's present relationship with Turkey, Bishop stressed that Australia and Turkey are working closely together in a range of global forums and that the relationship with Turkey also has rich cultural and social dimensions. "The Australian government is supporting the Australian International Cultural Council's Year of Australia in Turkey and Year of Turkey in Australia in 2015 – a series of bilateral exchanges to build on the Gallipoli centennial. The Australian government is also committed to strengthening bilateral trade and investment with Turkey," she said.
Last Update: May 28, 2015 10:37 pm
RELATED TOPICS