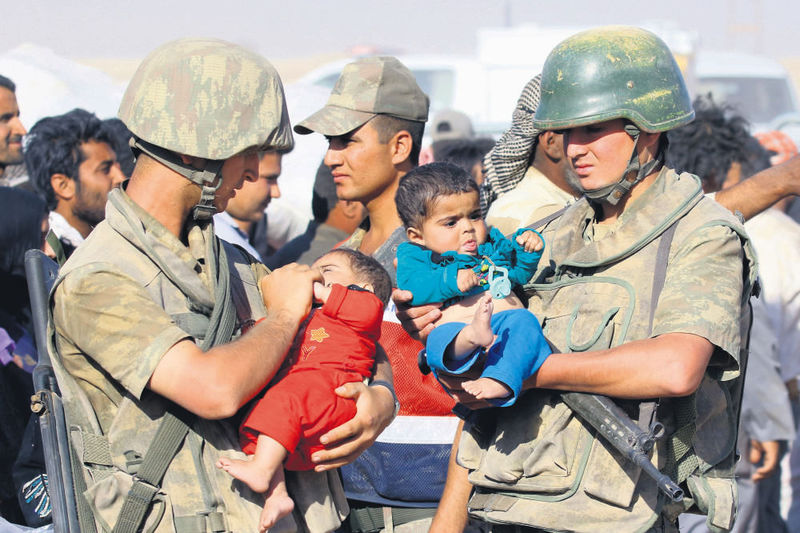 Turkish soldiers patroling the border with Syria help refugees entering the country on Thursday as clashes rage in the city of Ras al-Ayn.
by Ali Ünal Jun 11, 2015 12:00 am

Thousands of new Syrian refugees are entering Turkey as the PKK-linked Kurdish group PYD clashes with ISIS terrorists near the Turkish border. Turkey's efforts to deal with the large numbers of refugees have been praised by both PACE and UNHCR officials

A 25-member delegation from the Parliamentary Assembly of the Council of Europe (PACE) led by its President Anne Brasseur and with top parliamentarians from 21 countries will visit Turkish refugee camps on the border with Syria to see firsthand Turkey's efforts to deal with the large numbers of refugees fleeing conflict in the region.

Brasseur said she is impressed with Turkey's warm welcome for Syrians who fled their war-torn country. Furthermore, Karim Atassi of the U.N. High Commissioner for Refugees (UNHCR), speaking in Istanbul yesterday, dubbed the country's approach to refugee crisis management the "Turkish model."

Thursday's conference took place amid military escalation between the PKK-linked PYD and Islamic State of Iraq and al-Sham (ISIS) militants close to Turkey's southern border, which has led to thousands more Syrians fleeing to Turkey. Turkey has been facing a large influx of Syrian refugees fleeing the civil war in their country, which began in 2011. Numbers have skyrocketed over the last six years from 20,000 refugees to almost 2 million.

Atassi stressed that in the middle of the Syrian crisis Turkey was able to adopt a law on foreigners and international protection, adding: "The UNHCR has never seen a country in the middle of a crisis adopting a law managing asylum and migration. There is no other country. Turkey is the first one." The second pillar of the Turkish model, Atassi continued, is "numbers." He said Ankara was able to increase the quality of asylum although the number of people crossing into Turkey from Syria has increased. "Whenever we sit with other countries, we tell them Turkey has done it. If you have more refugees coming to your territory this does not decrease quality of asylum. This is the Turkey model. It is working," he said.

Ahead of World Refugee Day on June 20, the PACE delegation will fly to Gaziantep on Monday and visit refugee camps on the border with Syria run by the Disaster and Emergency Management Presidency (AFAD) to see Turkey's efforts to deal with the large numbers of refugees fleeing conflict in the region.

Answering Daily Sabah on the eve of the visit, Brasseur said she is hugely impressed by Turkey's warm welcome of the refugees. "Two million refugees from Syria and Iraq have fled across that bridge, been welcomed by Turkey and provided with asylum. I am hugely impressed with the warm welcome that Turkey has given to these desperate people, spending billions of dollars to keep them safe and living in decent conditions, as well as helping them to integrate. Europe as a whole benefits from this, and should do more to help," she said.

"I will lead a delegation of leading members of [PACE] to Gaziantep next week so that they can see for themselves the good work that is being done and hopefully take a message back to their countries that Turkey needs much greater support from individual countries and the international community," she said. "Turkey is an economic powerhouse and a role model for the region in many ways, so it is vital that its response to human rights challenges, of which there are still many, is also up to the highest European standards," she further added.

In recent weeks the PACE Standing Committee voted to increase the number of seats allocated to Turkey from 12 to 18 to reflect its increased population. Touching on this issue she said the decision means that Turkey will join France, Germany, Italy, Russia and the U.K. as having the largest delegations in PACE, each with 18 seats. "No other delegation will have more. It will mean more votes, and, since we are a democratic body, consequently more influence over the decisions made here," she said

She explained that Turkish members have been among the most active in PACE and that she values their contribution to upholding the democratic and human rights ideals championed by PACE. "Turkey has also provided an excellent president for the assembly in my predecessor, Mevlüt Cavuşoğlu. We need Turkey's view on the many challenges that we all face, but I hope that we can also have some influence on the many challenges that face Turkey," she said.
Last Update: Jun 12, 2015 12:56 am
RELATED TOPICS