Turkey has become the center of international attraction for education 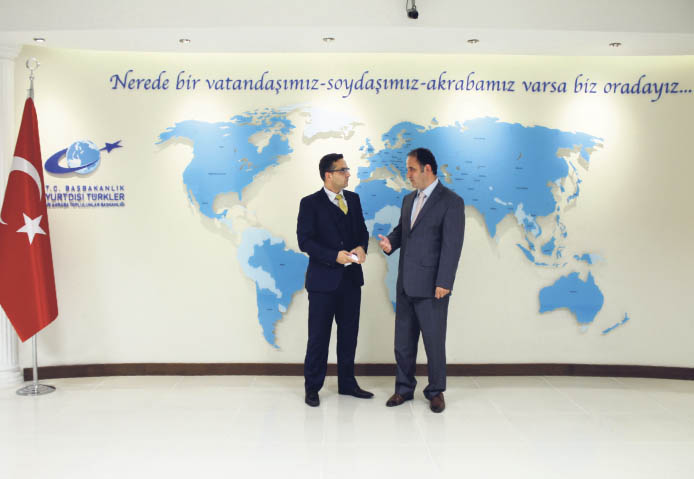 In the past year the Presidency for Turks Abroad and Related Communities (YTB) has provided scholarships for 5,000 foreign students from 182 countries to study in Turkey. The organization also deal with problems of Turkish communities abroad, mainly in Europe

The Presidency for Turks Abroad and Related Communities (YTB) is an institution that aims to establish a strong Turkish Diaspora.

On the other hand, the YTB is also known for its activities regarding international students and scholarships provided as part of the Türkiye Scholarships project. Daily Sabah spoke with the head of YTB, Assoc. Prof. Dr. Kudret Bülbül regarding the projects and activities of the institution.

- You organized a riveting award ceremony recently. Could you please elaborate on your institution's activities regarding international students?

I think it will be better to explain why we are interested in international students. There are three fields of activity for the YTB. The first and foremost is to have a strong Turkish Diaspora. The second is to cooperate closely with regions that we have historical and cultural ties with, while the third can be defined as to raise friends of Turkey.

When we compare the Türkiye Scholarship with other scholarship programs all around the world, we can safely say that it is one of the most extensive programs coordinated from a single center.

Furthermore, we do not only give scholarships, but we assure that they will be able to study at a university. We evaluate the online applications in coordination with the Council of Higher Education; we subject the applicants to a two-stage examination and ensure that successful students are admitted to suitable universities in Turkey.

We provide extensive opportunities to successful students. We assist students who are accepted to the program; we buy their plane tickets, greet them at the airport, help them settle into their dormitories; thus, we take care of them from the start to the end.

- When did the Türkiye Scholarship project first begin?

This project began in late President Turgut Özal's era, in 1992. The project initially covered Central Asian Turkic Republics and it took some time to extend it to the other parts of the world. When the YTB took over this project in 2012, there were around 8,000 applications. As I have mentioned, today we have 95,000 applicants from 182 countries.

- Do you think that the increased attention towards Türkiye Scholarships proves that Turkey has become a center of international attraction in education?

Absolutely, in the last few years, Turkey has transformed into a center of international attraction in education. It is important to state that the increased attention towards Türkiye Scholarships is due to the increased attention towards Turkey in general. Turkey, with its advanced economy, maturated democracy and improvements in human rights, has become a prominent country in the past 10-15 years. The success in these fields has contributed to Turkey's transformation into a center of attraction.

- What are your aims for the Türkiye Scholarship project in the following years? Do you have a certain aim for the institution, such as the number of applications?

I think that it is more suitable to answer your question through a perspective of civilization, rather than numbers. There are three problems currently faced by all of humanity. One of them is the lack of coexistence. If we cannot solve this issue, we may face greater catastrophes than we face today. The second is sharing; the distribution of wealth in the last few years can be defined as against the poor. The third issue is justice. The world, unfortunately, is evolving into a structure where it is ruled by the strong, not the righteous. There are many examples for these issues. When we look at our country and the Turkish civilization, we can see that we were successful in resolving these issues throughout our history. Turks have encountered and interacted with many cultures and civilizations on their way from Central Asia to Anatolia. Therefore, multiculturalism is a value that we have internalized. While there are 2 million Syrian refugees in our country, our people have embraced them. As a reflection of its multiculturalism, Turkey has been able to host these refugees without causing terrible social strife.

I think we can contribute to humanity on the matter of sharing, due to our belief and culture. We believe in the religion of a Prophet who has said "he who sleeps satiated while his neighbor is famished, is not one of us." In my opinion, it is this proverb that lies beneath Turkey's transformation into one of the countries that provides the most humanitarian aid.

Regarding justice, we are the representative of a civilization which has brought peace and justice for centuries to the most problematic geographies today: Caucasia, the Balkans and the Middle East.

- The YTB was also active in the voting process of Turkish citizens abroad in the June 7 elections. How did you contribute to it?

Turkey is one of the leading countries to give the right to vote to its people. Most are unfamiliar with this fact, but our first elections were held in 1876. However, this is not the case for our citizens living abroad. There were serious issues in this regard; however, they were amended in 2012. We have worked together with the Ministry of Foreign Affairs in the voting process of our citizens who live abroad. As the YTB, we briefed our citizens on how to cast a vote, distributed leaflets, and prepared radio programs to increase awareness.

We closely monitored last year's presidential elections and shared our conclusions with President [Recep Tayyip] Erdoğan and Prime Minister Ahmet Davutoğlu. This was to ease the process of voting for the citizens abroad; hence, we can consider the high level of participation in the June 7 elections as a contribution.

- When you look at the YTB's activities, it can be seen that many of them are for young people. Could you please elaborate on this subject?

While this project is a first, our method for actualizing this project is also a first. Our youths that participated in the project firstly applied to NGOs in their countries and then we invited these people to Turkey through these NGOs. The participants have had the chance to learn Turkish and to travel to some landmarks in Turkey. Most importantly, our young participants have continued their interest in Turkey via the NGOs.

Established by our citizens abroad, all of the NGOs that represent different groups living in Turkey have applied to our institution. Up until now, we have accepted every application regardless of their beliefs and ethnicities and we continue to accept. Some 1,500 of our youths have visited Turkey as a part of the project.

- The YTB also actualizes financial support programs. Could you please tell us about your activities in this field?

In addition, as the YTB, we provide scholarships to our citizens to continue their education in the country they are living.

- You have started a project named "International Student Academy." Could you please provide information on this project?

For example, we want a young Chinese person who is studying Business Management and came to Kayseri to establish connections with business organizations, later to have developing ties between Turkey and China as their mission.

We have integrated 4,000 students into the International Students Academy programs.

- Along all of these activities, you also provide legal support to citizens living abroad. Could you please provide more information to your activities on this subject?

I have stated that, as the YTB, it is our first and foremost goal to have a strong Turkish Diaspora. The legal support can be considered as a part of this goal. For example, some citizens request help when their children are taken from them and given to a foster family due to various reasons. We try to provide help to them in accordance with the legislation.

- Do your activities especially, in European countries, raise suspicion? Are there countries that consider your actions as interference into their internal affairs?

It is important to highlight that, as the YTB, our activities are transparent. We desire to work closely with European countries in order to actualize these activities together. From time to time, concerns emerge. On the other hand, while over 50 years have passed since the migration from Turkey to European countries, it is seen that Turkey has only been interested in these people recently. Turkey has not attended to his citizens' issues and integration for almost half a century. Unfortunately, we can see that many European countries have also neglected this issue.

Most of our problems today are caused by mutual disinterest. One of our aims is our citizens' active participation in the country they are living in. We think that this aim has to be shared with countries in which our citizens are living. None of the countries desire an inactive and non-contributing society.

We can integrate these individuals to contribute to the society that they live in and make them active citizens.

- Do you conduct research to profile the Turkish society living abroad?

We have actualized a research that can be considered as a first in our country. There are values surveys. For example, the University of Chicago and European Union has these kinds of surveys. In the previous year, for the first time, we conducted the YTD Values Survey to profile our citizens abroad. With this research, we tried to determine values of our citizens on 14 different subjects including language, culture and their perspective of Turkey.

The data that the research yielded has created a reference for more healthy evaluations. Frequent conduction of these surveys will contribute to the YTB in providing better and effective services, while revealing the inclinations of our citizens.
Last Update: Jun 22, 2015 12:37 am
RELATED TOPICS