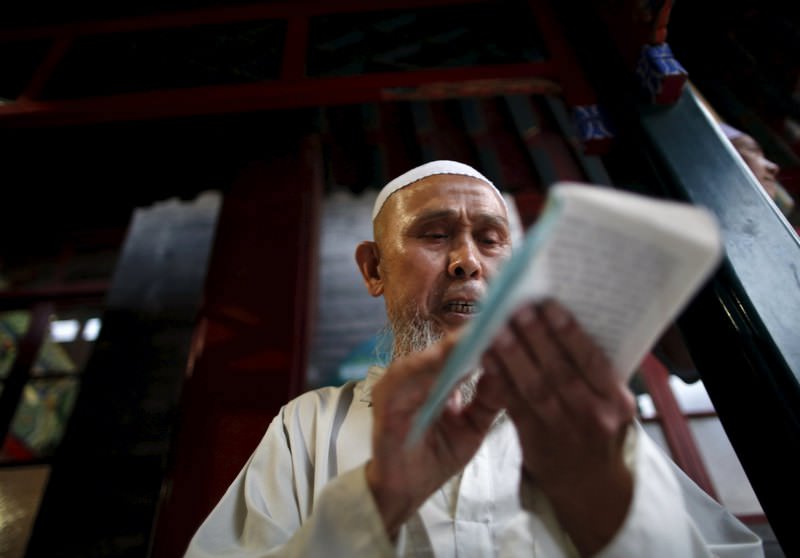 | Reuters Photo
by Daily Sabah with AA
Jun 30, 2015 12:00 am
Turkey's Foreign Ministry said it has expressed "deep concern" to China about reports that the country has instilled a fasting ban on segments of its Uighur Muslim population during the holy Muslim month of Ramadan.

In a statement released Tuesday the ministry said that it had informed the Chinese ambassador to Ankara of its worries.

"It has been publicly heard with sorrow that there are reports on Uighur Turks' fasting and fulfilling their religious duties was banned," the statement said.

The statement offered no explanation as to what it wanted China to do about the reported ban.

The expression of concern is reflective of the sentiment that many Turks have with regard to the Uighur issue.

A photo posted June 28 to a Facebook account dated named "Dogu Turkistan İcin" (For East Turkestan) shows a group of Turkish nationalists gathered outside a Chinese restaurant in Istanbul daubed with graffiti.

A caption underneath reads "Today, Grey wolves who took to the streets in Istanbul for East Turkestan, scattered a Chinese Restaurant and painted the restaurant sky blue."

Sympathisers have called for Marches July 4 and 5 in Istanbul to protest China's alleged religious restrictions.

Many Turks refer to China's Xinjiang Uyghur Autonomous Region - the home to many ethnic minority groups, including the Turkic Uighur people - as East Turkestan.

In mid-June it was widely reported that China has banned Ramadan in parts of Xinjiang Uyghur Autonomous Region for Party members, civil servants, students and teachers.

In 2014, the government issued warnings to employees and students not to fast during the holy month.

In January 2015, the ban was extended to wearing burqas in public places.

Turkey has accepted over 500 Uighur Turks, who sought refuge in the country at the beginning of 2015.