Turkish Cypriot leader wants to be “part and parcel of Europe” 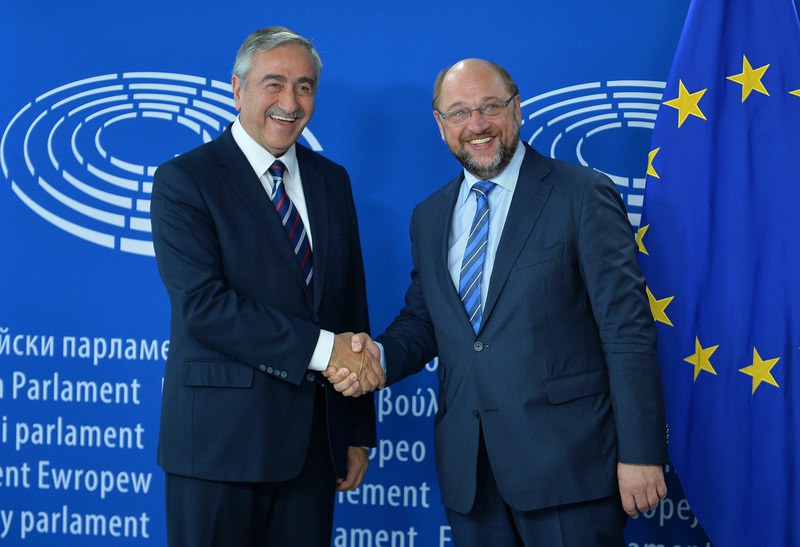 | AA Photo
by Daily Sabah with AA Jul 01, 2015 12:00 am
President of the Turkish Republic of Northern Cyprus Mustafa Akıncı on Wednesday called for Europe's support in reuniting the divided island in a meeting in Brussels with Martin Schulz, the president of the European Parliament.

Speaking at a joint press conference in Brussels with European Parliament President Martin Schulz, he said: "We want a solution for our people, we don't want the continuation of the status quo. We are approaching the final destination and I am convinced that the European Parliament will be supportive."

Akıncı said that after being 'outside the international law for many years they wanted to be a part and parcel of Europe'. "We want our community to be part of the European family." he added.
Schulz told reporters in Brussels that "It is in the highest interest of the EU that talks are successful," after his meeting with Akıncı. He added that they will "do whatever is responsible to contribute to success. We are hopeful this is our window of opportunity."

Akıncı will stay in Brussels until Friday for meetings with EU officials.

Akıncı and Greek Cypriot leader Nicos Anastasiades resumed negotiations in May, shortly after Akıncı's election.
The talks stalled in October last year in a row over mineral exploration off the island.

But the two Cyprus leaders are due to meet again on July 10 for negotiations. Both of the leaders will also attend a discussion session organized by both side's chamber of commerce on July 8.
Last Update: Jul 01, 2015 8:36 pm
RELATED TOPICS