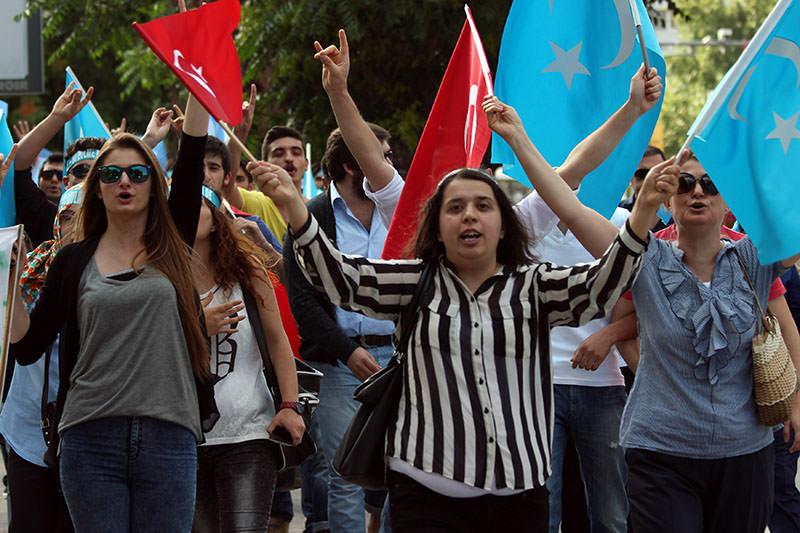 Turkish protestors demonstrate in front of the Chinese Embassy in Ankara, on July 5, 2015, to denounce the Chinese governmentu2019s policies on Uyghur Muslims (AFP Photo)
by Anadolu Agency Jul 06, 2015 12:00 am
China has once again declared its discomfort over the anti-China protests that have been taking place for almost a week across Turkey.

On Monday, the Foreign Ministry sought to underline that Beijing does not discriminate against its Muslim population as protesters have been claiming.

Spokesperson Hua Chunying told reporters at a press conference that Beijing had absolutely no issue with Uighur Turks, saying that "foreign media" had got it wrong.

"Uighur are one of the 56 ethnic minorities in China. More than 10 million Uighur Turks are living happily and peacefully," she added.

In a statement released Tuesday, Turkey's Foreign Ministry had expressed "deep concern" to China about the reports that Beijing had instilled a fasting ban on segments of its Uighur Muslim population.

"It has been publicly heard with sorrow that there are reports of the fasting and fulfilling of religious duties by Uighur Turks being banned," it stated.
Foreign Minister Mevlüt Çavuşoğlu later told reporters that Turkey closely followed the Uighur issue.

"They are important to us, we declare our connection with them in every occasion. We also let the Chinese officials know that it is very natural for us to react against a human rights violation there when it happens," he said.

Since the statements, widespread protests have taken place across Turkey, nearly 2,000 people marching on the Chinese consulate in İstanbul at their peak.

On Monday, Chunying said that Uighur Turks were allowed to practice their Muslim faith.

"These people [Uighur Turks] have the freedom of religion under Chinese constitution," she stressed.

"We are highly concerned about anti-China protests in Turkey. We have asked Turkish officials to protect our citizens' lives and properties there. We want Turkey to respect China's territorial integrity and independence, to be careful with their speeches and attitude towards the issue, as well as to contribute to China-Turkey bilateral relations."

In mid-June, it was widely reported that China had banned fasting in parts of Xinjiang Uyghur Autonomous Region for party members, civil servants, students and teachers.

Many Turks believe that Uighur are among a number of Turkic tribes that inhabit China's Xinjiang Uyghur Autonomous Region, and consider it to be part of Central Asia, not China.