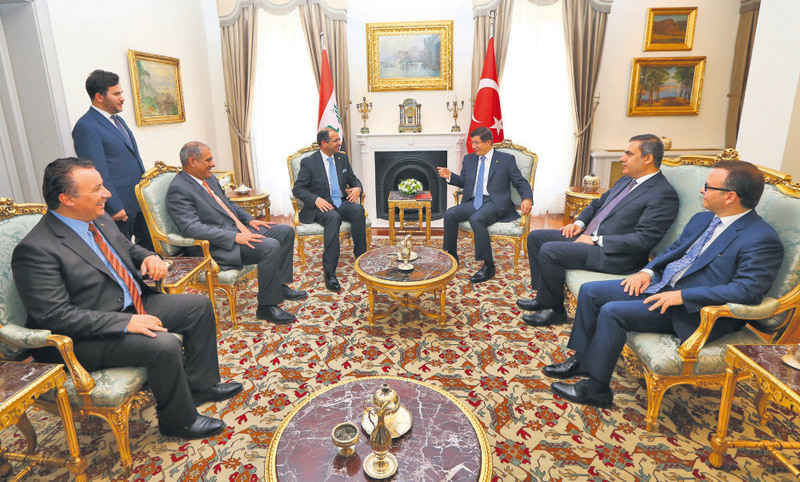 The speaker of the Iraqi parliament held a meeting with PM Davutoğlu in which Ankara reiterated its support for the anti-ISIS fight in Iraq. In recent months, Ankara has launched a program to train hundreds of Iraqi forces to help them fight ISIS

The speaker of Iraqi parliament, Salim al-Jabouri, paid an important visit to Ankara on Tuesday while the Iraqi armed forces made the final preparations for an operation to liberate Mosul, which was captured by the Islamic State of Iraq and al-Sham (ISIS) in June 2014. Prime Ministry sources reported that Prime Minister Ahmet Davutoğlu and Jabouri met in Ankara on Tuesday and discussed developments in Iraq and in the region along with bilateral relations. Alongside Davutoğlu, the head of the National Intelligence Organization (MİT), Hakan Fidan, was also present at the meeting.

In the meeting Davutoğlu said that Turkey will continue to support Iraq in the fight against ISIS and highlighted that unity and reconciliation in Iraq is of the utmost importance in succeeding against terrorism. Davutoğlu also remarked that the swift and inclusive accomplishment of the Iraqi parliament's legislative efforts regarding the consolidation of reconciliation and the fight against ISIS was crucial.

In recent months Turkey launched a program to train Iraqi forces in Mosul to help them fight ISIS. "Turkey will provide training, which is set to take place around 25 kilometers from Mosul, as per the demand from Iraq," Foreign Minister Mevlüt Çavuşoğlu said in May. Iraqi sources also reported that Turkey has provided non-lethal military aid for 500 Iraqi government soldiers in Baghdad, including camouflage desert caps, assault vests, helmets, sleeping bags, blankets and 50 cold weather tents.

Turkey has also been continuing to support the Iraqi Kurdish peshmerga of the autonomous Kurdish Regional Government (KRG) in their struggle against ISIS as well as working for the security of the country's Turkmen minority.

U.S. military officials announced in February that a military offensive to retake Iraq's second largest city from ISIS will likely begin in April or May, however, the operation was delayed due to a failure to complete the preparations. Last week, Iraqi warplanes dropped leaflets in northwestern Iraq and the incident is considered a signal that an operation to liberate Mosul will commence soon. "Each step that the [Iraqi] government will take for Mosul is for the future and freedom of people. [ISIS] terrorists polluted your lands [Mosul citizens] a year ago. Liberation from ignorance and oppression is near. Our armed forces are on your doorstep," read a statement by Iraq's Ministry of the Interior printed on the leaflets. The leaflets also warned the people of Mosul to stay away from ISIS strongholds located in the city.

The governor of Nineveh province, Athil al-Nujaifi, earlier said the Iraqi army would carry out the first phase of the liberation of Mosul by itself using heavy weapons to strike ISIS. The second phase, Nujaifi said, would be handled by special forces made up of local police in Mosul and the National Mobilization Force. The battle would involve a total of about 12 Iraqi brigades, or between 20,000 and 25,000 troops.

Mosul is the largest city under the control of ISIS, who have declared a cross-border state encompassing eastern Syria and parts of western and northern Iraq. Its recapture would be a pivotal victory for Baghdad.
Last Update: Jul 08, 2015 8:21 pm
RELATED TOPICS