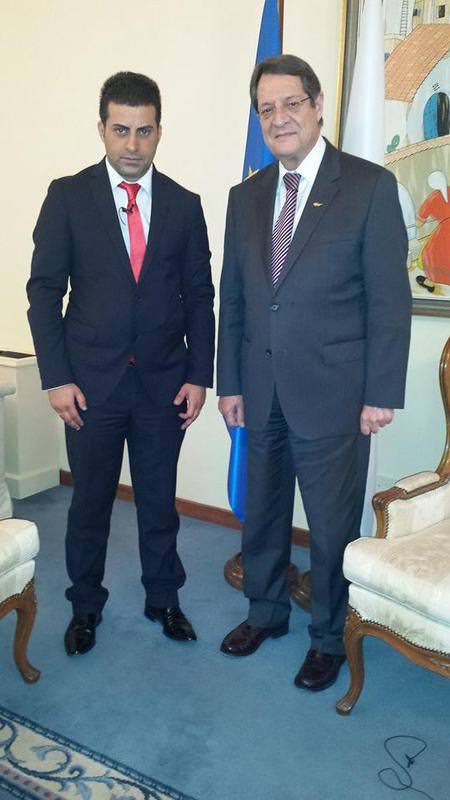 Greek Cypriot President Nicos Anastasiades has said the AK Party has a genuine will to reach a resolution in the peace talks on Cyprus to unite the divided island. He said the issue was addressed for the first time during the party's time in power

Greek Cypriot President Nicos Anastasiades spoke to Daily Sabah, the first time he has spoken to Turkish media following the reunification negotiations that were reinitiated on the island on May 15. The negotiations had been suspended for seven months due to the drilling conflict in the region. Sharing his thoughts on Turkish Cypriots, Anastasiades said: "We used to attend the circumcision and wedding ceremonies of Turks. We had nice and brotherly relations. My biggest wish is to be on the same terms again." When asked which Turkish political party presents a peaceful path for the resolution of the Cyprus issue, he replied: "The AK Party [Justice and Development Party], of course. After the AK Party came to power, it issued announcements regarding the requirement of finding a resolution to the current situation on Cyprus for the first time."

Anastasiades also commented on the three-month negotiation process that has been underway with Turkish Cypriot President Mustafa Akıncı. "First of all, I would like to thank you. What I want to say is that a very positive atmosphere based on mutual respect was created between us two leaders. We are discussing all the topics of negotiation by staying in touch. And we are negotiating these topics in a very serious manner," he said. "As I said before, there is quite a positive atmosphere at the moment for the negotiations. However, an agreement could not be achieved on some topics yet," he said, underlining that some topics were agreed on while some others remained unresolved. Anastasiades also said it is not right to express an opinion regarding the progress of the negotiation process and waiting is the best attitude for the time being.

He also said they faced serious difficulties on three articles of the seven-article mutual agreement, which was announced on Feb. 11, 2014. "So far, we have met only three times. The hardest issues we are to deal with are on the regulation of estates, properties and lands, of course. Both leaders' sharing the same vision is what really matters though, and I think both leaders have the same vision now. We want to come up with a solution by considering our mutual concerns," he said. Anastasiades added that Greece, which officially declared bankruptcy last month, do not cause any serious harm to the economy of Cyprus. "As you know, Greece is about to engage in a new initiative. And I can say that this has not influenced the economy of Cyprus," he said.

When asked about the profile of Turks he aims at founding a mutual land with, Anastasiades argued that Greek and Turkish Cypriots do not have so many differences. "As you already know, we have lived together for centuries and our characteristics and mentalities have been almost the same since the beginning. So, I can argue that our mentality is quite different from those in Greece and Turkey," he said. "Of course, my remarks are not based on any ethnicity. My father is from Silubu village, which is a hybrid village. Turks and Greeks have lived together there. And as far as I know, their relations were perfect. They were living on brotherly terms. My father, who was living with a Turkish Cypriot family, used to say that. So, the Turkish profile remained this way in my mind. I did not live in Silubu. I lived in Limassol's Somados village, and as far as I remember, the Turks and Greeks living there were on friendly terms. We showed respect to each other. We used to attend each other's weddings and circumcision ceremonies. And we used to live together as a whole in the framework of mutual love and respect. Our current problems stems from the intervention of some countries in our domestic affairs, which are namely Greece, Turkey and the U.K.," Anastasiades said.

Anastasiades added it is easier to negotiate with Akıncı than other Turkish leaders. "I first want to underline that I have total respect for [former Turkish Cypriot President] Derviş Eroğlu. But as I mentioned before, we share the same vision with Mustafa Akıncı. Our viewpoints to the resolution are almost the same. And our dreams of resolving the Cyprus issues are almost the same, too."

Speaking highly of Erdoğan, Anastasiades said: "I would like to say that Erdoğan is a historic leader for Turkey. As for the announcements that were issued, we and Mustafa Akıncı should be supported for the resolution. We do not expect announcements from Turkey. We expect the demonstration of its determination in practice. And some steps can be taken on some safety measures. There are some obligations regarding the military zones. For example, the barricades in the Piroy district cannot be opened. And we think these barricades should be removed. The graves of missing people are located in 32 separate zones and excavation work is not allowed since these regions are in the realm of military zones. We expect some serious steps from Turkey in such matters," he said.

Anastasiades also clarified the mutual state that is planned to be founded. Refuting the latest remark from Akıncı, who said the name of the mutual state would be "United Federal Cyprus," Anastasiades said, "During the conversation we had with Mr. Akıncı regarding the name of the state, 'United Federal Cyprus' was mentioned, which is not true. The name my heart desires is 'United States of Cyprus,' " he said.

The Greek Cypriot leader also sent a message to Ankara from Nicosia. "We first expect support from Turkey to our efforts with Mr. Mustafa Akıncı. We also wish Ankara to contribute to the resolution of the Cyprus issue."

Anastasiades added that the resolution of the Cyprus issue would also favor Turkey. "This result will favor all the countries in the region. Turkey's relations with Greece will be mended as a result of peace between these two countries. The passage to Europe and the ways of providing gas from the Levantine region can be opened. All in all, the success of negotiations on Cyprus will positively affect all the countries in the region and the Cypriot state will stand as a model country. And most importantly, the Federal Cyprus Republic, which would be in the European Union, will also be a close ally of Turkey at the same time," Anastasiades said.
Last Update: Jul 27, 2015 1:01 am
RELATED TOPICS