US, Turkey to coordinate with Syrian opposition against ISIS 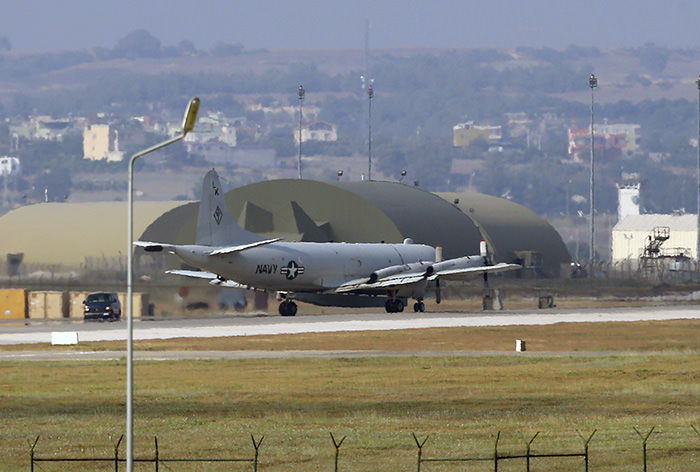 A United States Navy plane maneuvers on the runway of the Incirlik Air Base, in Adana, in the outskirts of the city of Adana, southeastern Turkey, Tuesday, July 28, 2015 (AP Photo)
by Ragıp Soylu Jul 28, 2015 12:00 am
United States and Turkey have agreed to coordinate with moderate Syrian groups against self-proclaimed Islamic State of Iraq and al-Sham(ISIS), yet details of the "model" still needed to be worked on, senior U.S. officials told journalists via teleconference on Tuesday.

The officials said they reached an understanding with Turkey to deepen their cooperation against ISIS in Syria after nine to ten months of constructive talks and now their main aim is to clean the last stretch of Turkish border from ISIS.

Turkey last week announced that it would allow U.S. and coalition manned and unmanned warplanes to use its airbases, including İncirlik, which will significantly reduce the time between an airstrike being called in and a target being hit.

A senior administration official said Turkey and U.S. would mutually select the opposition groups that they would like work with against ISIS. The official said both sides still need to sit and talk about how they would exactly cooperate on this issue.

Another official said both parties were still discussing on the details of using the Turkish airbases against ISIS targets in Syria and avoided responding to the question whether there was a restriction on access to those facilities. "We are working right now at the planning stage. There's a lot that has to be taken into consideration both by the Turkish military as well as the U.S. military as we figure out how we might operate together- how we might tactically use air forces, air strikes, coming out of Turkey" he said.

The official also reiterated U.S. position on Turkish airstrikes against PKK targets in Iraq and said that U.S. had designated Kurdish-separatist PKK as a terrorist organization. "Strikes against this organization has nothing to do with our recent understanding with Turkey. The triggering event for these airstrikes was PKK's attacks on Turkish soldiers and police officers. We call PKK to avoid such provocations" he said.

A senior U.S. official stated that Turkey wasn't targeting PKK-affiliated PYD in Syria and Turkey's role was very significant during Kobani siege last year when Turkey provided shelter for more than 200.000 refugees from the city and allowed Kurdish Peshmerga forces to cross to Syria via Turkey with heavy weapons.

In response to a question on a planned "ISIS-free zone" in the North of Syria, he refused to recognize such a description but said that they would clean ISIS from there by using more effective and timely airstrikes and coordinating the opposition groups on the ground.

The State Department Spokesperson John Kirby also yesterday refrained from saying efforts in northern Syria against ISIS are an attempt to develop an "ISIS-free zone", and said, "we're going after ISIS wherever they tend to go."

Last week, Turkey launched airstrikes against ISIS targets in Syria and PKK camps in northern Iraq. Turkey has been hit by violence since a suicide bomb attack by a suspected ISIS supporter killed 32 activists in the southern town of Suruç on July 20.
Last Update: Jul 28, 2015 10:55 pm
RELATED TOPICS