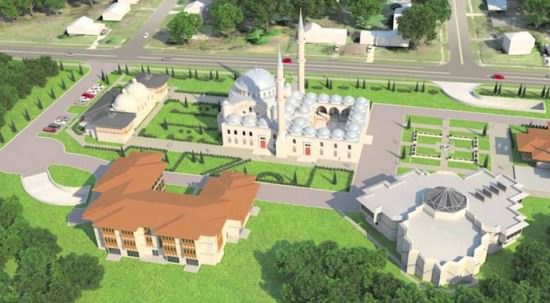 by Daily Sabah Aug 04, 2015 12:00 am
President Recep Tayyip Erdoğan will reportedly open the world's largest Islamic-Ottoman social complex in Maryland, U.S. during his upcoming expected visit to America. Erdoğan recently stated that he will visit the U.S. on a diplomatic mission before attending the G20 on November 15-16 which will take place in Turkey's southern province of Antalya.

During his visit to the U.S., Erdoğan is also expected to attend the opening ceremony of "Maryland Külliye," an Ottoman architectural concept which designates a complex with a central mosque and a series of ancillary buildings - such as a library, hospital, and public fountain - surrounding it.

The land on which Maryland Külliye is being built on was reportedly bought in 1993, but construction of the complex did not start until 2011. The Islamic Center of Maryland names the complex as the "Master Plan" and says on its website that they are currently undertaking the necessary steps in completing the project, with construction of a school, youth, and community center on the complex underway. The center has already raised a considerable amount of funds for the complex's construction from various fundraisers, one of which was reportedly supported by the Presidency of Religious Affairs of Turkey, but the Center still urges anyone who believes in the good of the complex to make more donations.

The tradition of 'külliye' is particularly marked in Turkish architecture, within the Seljuk – particularly the Ottoman Empire and also Timurid architectural legacies. Accordingly, in the Maryland Külliye, a café called "Ottoman" will also provide services to those visiting the center.