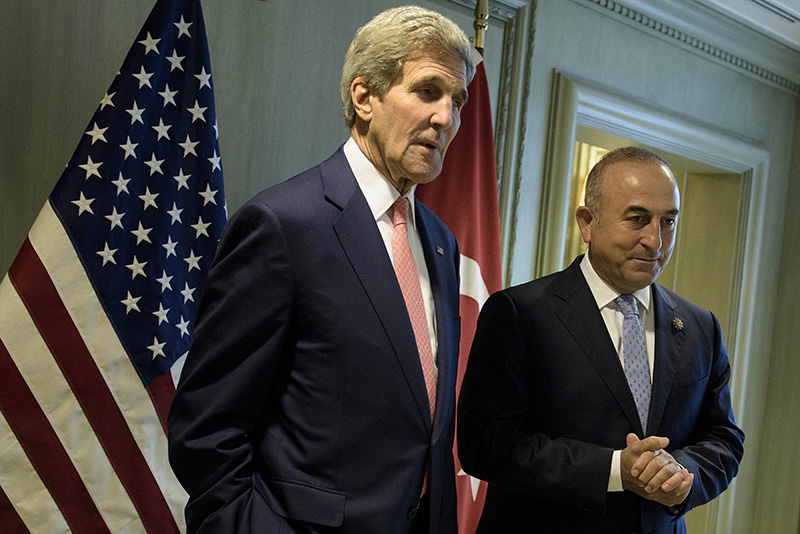 US Secretary of State John Kerry and Turkeyu2019s Foreign Minister Mevlu00fct u00c7avuu015fou011flu wait for a meeting in Kuala Lumpur, Malaysia, on Wednesday, Aug. 5, 2015 (AP Photo)
by Daily Sabah Aug 05, 2015 12:00 am
U.S. drones and aircraft have begun arriving at İncirlık Air Base close to the border with Syria, and an "extensive" fight against ISIS militants will soon begin, Foreign Minister Mevlüt Çavuşoğlu said on Wednesday. He made the comments on the sidelines of a regional security gathering hosted by the 10-member Association of Southeast Asian Nations (ASEAN) in Kuala-Lumpur.

"As part of the agreement reached with the United States we have made great strides on the technicalities of İncirlik's use and U.S. aircraft have started to arrive," Çavuşoğlu said.

"Soon we [U.S. and Turkey] will together start an extensive battle against ISIS. Now we are training and equipping the moderate [Syrian] opposition together with the United States, and we will also start our fight against ISIS very effectively soon," Çavusoğlu told reporters at the start of the meeting with U.S. Secretary of State John Kerry in Malaysia.

He said it will be safer for the moderate opposition groups that are fighting ISIS on the ground. Çavuşoğlu's comments came following reports that members of the Free Syrian Army (FSA) who went through a U.S. training program to fight ISIS militants were captured by the al-Qaida-linked Nusra Front in Syria. Since last week, reports from inside Syria have been claiming that al-Nusra Front disarmed and captured at least five fighters trained by the U.S. and coalition forces. Çavuşoğlu said ISIS is the biggest threat in the region and needs to be dealt with a strategy that is "result-oriented."

Now that Ankara has formally signed a deal with Washington for opening its İncirlik Air Base in Adana province to the U.S.-led coalition to fight ISIS, reports have said the U.S. has plans to bring 30 fighter jets along with 300 troops to start hitting ISIS militant positions located only 200 kilometers away from the base.

According to sources in Ankara, airstrikes will not only aim to weaken ISIS, but will also pave the way for Ankara's demand to create a safe zone in northern Syria. Recently, media reported a U.S. official who said: "The goal is to establish an ISIS-free zone and ensure greater security and stability along Turkey's border with Syria."

Reportedly, nearly 300 troops, military supplies, 30 fighter jets including F-16s and F-15s along with several tanker aircraft have started to be deployed to İncirlik Air Base. In an attempt to create an ISIS-free zone, the joint operation with Ankara will be launched once U.S. personnel and equipment have been deployed at the base. In addition, the U.S. has started providing air cover for moderate opposition forces in accordance with the recent deal.

Support was provided last week when U.S.-led coalition fighter jets helped moderate opposition forces in a clash with al-Nusra Front militants in Azaz province in Syria. The demand for air protection for moderate opposition forces was expressed in May by Çavuşoğlu: "They have to be supported from the air. If you do not protect them or provide air support, what is the point?"

President Recep Tayyip Erdoğan on Sunday mentioned why providing air support for moderate opposition forces is crucial. Emphasizing that another benefit of air support is helping refugees return to their homes by means of a secure border, Erdoğan said: "Our support for moderate opposition forces and cooperation with the coalition is very important. The supply routes to opposition forces need to be secure. What we also want is to allow refugees who want to return to their homes to do so. Turkey will do what is necessary to ensure that."

In addition, Republican Senator Johnny Isakson, the senior senator from Georgia, was also pleased with Turkey's decision to allow the U.S.-led anti-ISIS coalition to use the air base. "Strategically, [İncirlik] is very well located. The Turks have not allowed us to use İncirlik [in the past] so the fact that they are now considering it, I think, bodes well," he said.

Another vital point discussed at the meeting between U.S. and Turkish officials was how to use the air base. Ankara agreed to allow the U.S.-led coalition to use the air base under its control. Additionally, Ankara assured that it would enhance its fight against ISIS, including active participation in U.S.-led coalition operations in the case of a security threat to the border. Turkish fighter jets, however, will participate in the operations not from İncirlik, but from other nearby air bases.

İncirlik is a key joint U.S. air base used by the Turkish Air Force located outside the city of Adana, some 150 kilometers from the Syrian border. Since November 2011, the U.S. air force has been flying unarmed drones from İncirlik Air Base. The U.S. will now be able to conduct airstrikes from the air base.