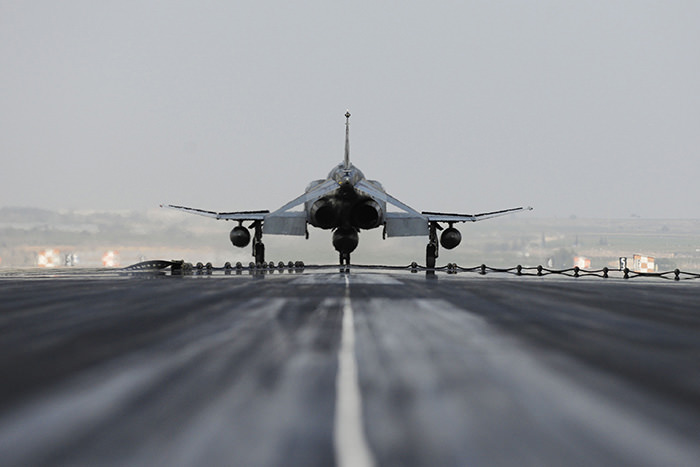 After FM Çavuşoğlu announced that an ‘extensive’ fight against ISIS will begin soon, U.S. fighter jets started hitting ISIS positions in Syria from Turkey’s İncirlik Air Base and the Pentagon announced that the U.S. will deploy manned warplanes in the near future to İncirlik

After Foreign Minister Mevlüt Çavuşoğlu announced that an "extensive" fight against the Islamic State of Iraq and al-Sham (ISIS) will begin soon, U.S. fighter jets started hitting ISIS targets in Syria from Turkey's İncirlik Air Base and the Pentagon announced on Thursday that the U.S. will deploy manned war planes in the near future to İncirlik.

In response to a question regarding the agreement between Washington and Ankara on using the U.S. İncirlik Air Base in Turkey, Pentagon spokesman Capt. Mark Davis told reporters that there are currently unmanned and armed aircraft at the air base. The agreement also includes deployment of manned and armed aircraft to the air base as part of the plan, he said. The deployment, however, will take time due to logistics, Davis said.

"As part of the agreement reached with the United States, we have made great strides on the technicalities of İncirlik's use and U.S. aircraft have started to arrive. Soon we [U.S. and Turkey] will together start an extensive battle against ISIS. Now we are training and equipping the moderate [Syrian] opposition together with the United States, and we will also start our fight against ISIS very effectively soon," Çavusoğlu told reporters at the start of the meeting with U.S. Secretary of State John Kerry in Malaysia.

Now that Ankara has formally signed a deal with Washington for opening the İncirlik Air Base in Adana province to the U.S.-led coalition to fight ISIS, reports have said the U.S. has plans to bring 30 fighter jets along with 300 troops to start hitting ISIS militant positions located only 200 kilometers away from the base.

İncirlik is a key joint U.S. air base used by the Turkish Air Force located outside the city of Adana, some 150 kilometers from the Syrian border. Since November 2011, the U.S. air force has been flying unarmed drones from İncirlik Air Base. The U.S. will now be able to conduct airstrikes from the air base.
Another vital point discussed in the meeting between U.S. and Turkish officials was how to use the air base. Ankara agreed to allow the U.S.-led coalition to use it under its control. Additionally, Ankara assured that it would enhance its fight against ISIS, including active participation in U.S.-led coalition operations in the case of a security threat to the border. Turkish fighter jets, however, will not participate in operations from İncirlik, but from other nearby air bases.

Furthermore, the Pentagon said that it does not know the location of its recently deployed New Syrian Forces. Commenting on the issue, Davis told reporters on Thursday that the Syrian rebels do not "fall under our chain of command," and as such, the Pentagon is reliant upon the groups it works with to know their status. A total of 54 Syrian opposition fighters went into the country earlier this month after completing training at the beginning of July. Shortly after the fighters were deployed they came under attack from al-Qaeda's Syria affiliate al-Nusra Front. The U.S. carried out airstrikes in defense of the New Syrian Forces, but an unknown number were taken hostage by the extremists and at least one was killed.

"Clearly there have been challenges. Some of those challenges, as you know, have come from al-Nusra Front," Davis said. "But overall we remain committed to ensuring that we have a group there that we can train and equip, the moderate Syrian opposition who can continue to fight against [ISIS] on the ground as part of a broader strategy to defeat [ISIS] across the region."

White House spokesman Josh Earnest said President Barack Obama has been briefed on the efforts to train and equip the Syrian fighters, and the Pentagon has been clear about the obstacles presented by the mission.

"The president certainly does have the expectation that the United States and our coalition partners learn from the significant challenges that we have encountered in trying to train, equip and empower the Syrian opposition fighters on the ground in Syria," Earnest said.

"But it has not significantly encumbered the other aspects of our strategy that are yielding important results in northern Syria," he added, referring to efforts to defend Kobani and the use of airstrikes to protect successive advances against ISIS in northern Syria.
Last Update: Aug 07, 2015 7:09 pm
RELATED TOPICS