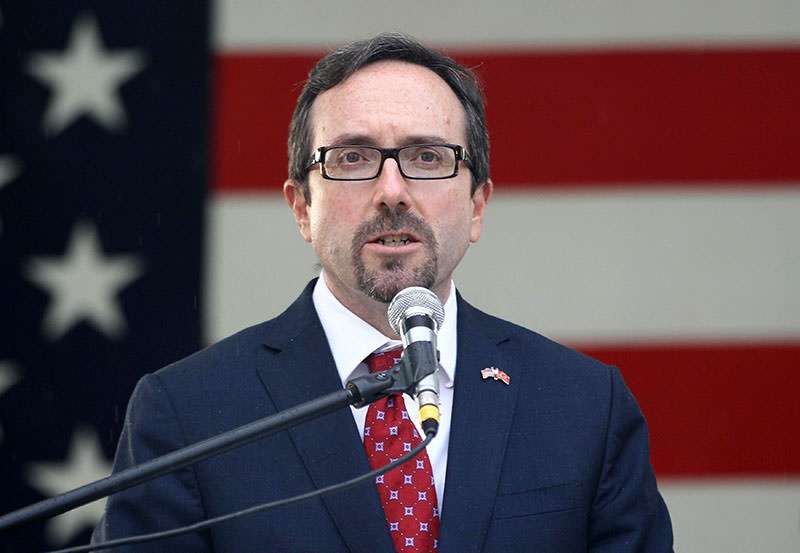 US ambassador to Turkey John Bass delivers a speech at the ambassadoru2019s residence in Ankara on July 2, 2015 during an early reception for US Independence Day on July 4 (AFP photo)
by Daily Sabah Aug 10, 2015 12:00 am
The U.S. Embassy in Ankara released a statement on Monday refuting the Turkish daily, Cumhuriyet's article claim that U.S. diplomat to Ankara John Bass told the pro-Kurdish Peoples' Democratic Party (HDP) to be patient concerning military operations against the terrorist PKK.

The daily claimed that Bass told the delegation that once Turkey and the U.S. start their "extensive fight" against the Islamic State of Iraq and al-Sham (ISIS) in Syria, the operations against the PKK will weaken. "Be patient for a month or two," the paper reported Bass as saying.

"An article in today's [Aug. 10, 2015] Cumhuriyet newspaper attributes to U.S. Ambassador John Bass a number of quotes that are simply inaccurate, and others that are exaggerated or taken out of context," the embassy said in its statement.

"Ambassador Bass did meet with representatives of the HDP in July, as part of ongoing conversations the Embassy holds with groups from across the political spectrum, inside and outside of government. The Embassy categorically rejects Cumhuriyet's characterization of the meeting," the statement added.
Last Update: Aug 11, 2015 12:22 am
RELATED TOPICS