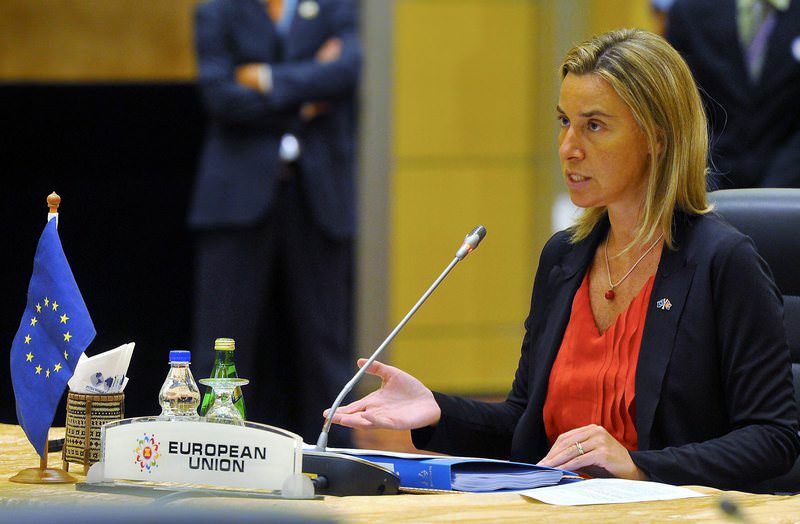 by Fatih Şemsettin Işık Aug 26, 2015 12:00 am
High Representative of the EU for Foreign Affairs and Security Policy Federica Mogherini said the EU must develop cooperation with Turkey in management of the flow of refugees and called on the EU to be aware of the number of Syrian refugees in the country.

Speaking at a joint press conference in Talinn, Estonia on Monday, Mogherini indicated that the EU is already supporting Turkey in this issue, but stressed that it should do more in working with Turkey.

Speaking of her visit to the refugee camp in Turkey's southeastern Gaziantep province in December 2014, she said: "I think that in this story of this huge migration flow and refugees flow that we are experiencing due to the large number of crises surrounding us, we have to realize that the blame game is not bringing any kind of positive result for anybody."

"Turkey itself is hosting millions of refugees, we should be aware of that, and we are already supporting Turkey in this," she said and explained that the root causes of the Syrian conflict must be solved in cooperation with other countries.

Since the outbreak of the now five-year civil war, Turkey had opened its borders to hundreds of thousands of Syrian refugees, which has come at a substantial cost to the government, as it has spent nearly $6 billion to provide for the well-being of refugees currently in the country. Turkey is home to more than 2 million refugees, being already the country with the largest refugee population in the world. Fourteen percent of Syrians in Turkey live in refugee camps that were built by the government. The rest are scattered around Turkey, particularly in border provinces and Istanbul.

Along with that, officials have said that the country cannot absorb any more refugees, taking also security risks into account. Speaking to Sabah daily on Aug. 3, the president of the Prime Ministry Disaster and Emergency Management Authority (AFAD), Fuat Oktay, said: "The truth is, Turkey cannot take any more refugees; we are at full capacity. You cannot expect a country to take care of millions of refugees by itself. Turkey is trying to do what is necessary to maintain its security."

The repercussions of having a whopping 2 million refugees has pushed the government to seek international assistance to share its burden, but thus far, it has received neither satisfactory funds from the West to meet the expenses of sheltering refugees nor was it supported by the U.S.-led coalition to establish a safe zone near its border.
Last Update: Aug 26, 2015 1:57 am
RELATED TOPICS