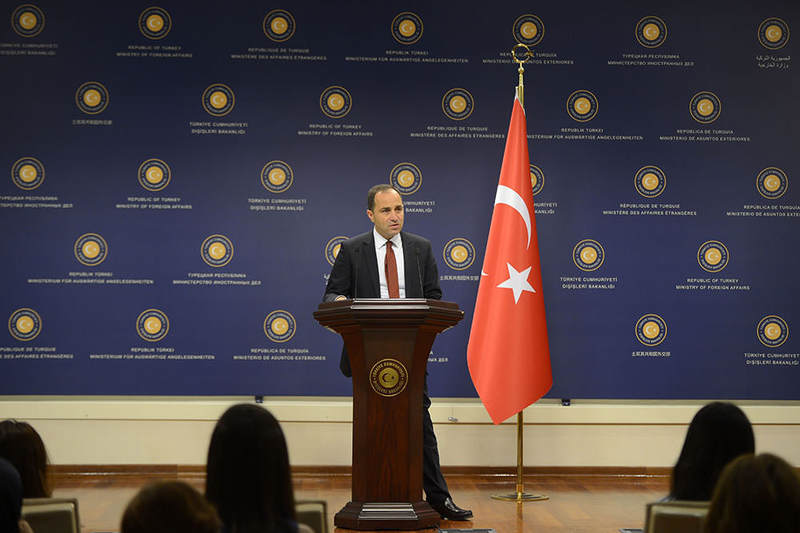 In a statement issued on Wednesday, Bilgiç criticized reports in foreign media outlets that claim fighters from the Division 30 brigade of 54 moderate, U.S.-trained Syrian opposition forces were captured by the al-Nusra Front on a tip from Turkey and said: "The report claiming that our country is connected with the incident of the first group of trainees being kidnapped by a terrorist group during their return to Syria is totally a figment of the imagination."

"Alleging Turkey has a relationship with groups that are terrorist organizations is a purposeful and flagrant untruth," he said.
Along with that, U.S. officials indicated that the allegation lacks accuracy.

Hours before the statement, Pentagon Press Secretary Peter Cook also remarked on the issue and said they have seen the reports but they have "no indications that the Turkish government was involved in tipping off the Nusra Front to the location of those trainees."

Reportedly, Pentagon spokesman Navy Capt. Jeff Davis said the U.S. military had seen "no indications that Turkish officials alerted the Nusra Front," adding that Turkey is "a NATO ally, close friend of the United States and an important partner in the international coalition."

Division 30 is among the units receiving training as part of a U.S.-led program operating in Turkey that is intended to create a force to fight the Islamic State of Iraq and al-Sham (ISIS). But after the first 54 members of the force entered Syria in July, 13 were kidnapped by al-Nusra Front militants, including a commander, and at least three more were killed in clashes with the group.

The U.S. and Turkey inked an agreement in February to train and equip moderate Syrian opposition forces, and after months of delay due to logistical matters, the program began in Kırşehir in May. Though the program was to take place in Turkey, Jordan, Saudi Arabia and Qatar, so far it has only taken place in Turkey and Jordan.

According to the agreement, groups of 300 to 2,000 Free Syrian Army (FSA) soldiers were to be trained, but only 54 have been so far. Pentagon officials recently reported the program is moving slower than expected due to complications in vetting volunteers and transporting them from Syria for training. Furthermore, Turkish media outlets recently reported that dozens of moderate opposition fighters withdrew from the program after they refused to sign a contract assuring that they would not fight against the Syrian regime. Many Syrian volunteers prefer to use their training to fight both ISIS and forces loyal to Syrian President Bashar Assad, which was the original aim of the revolution before it got complicated.