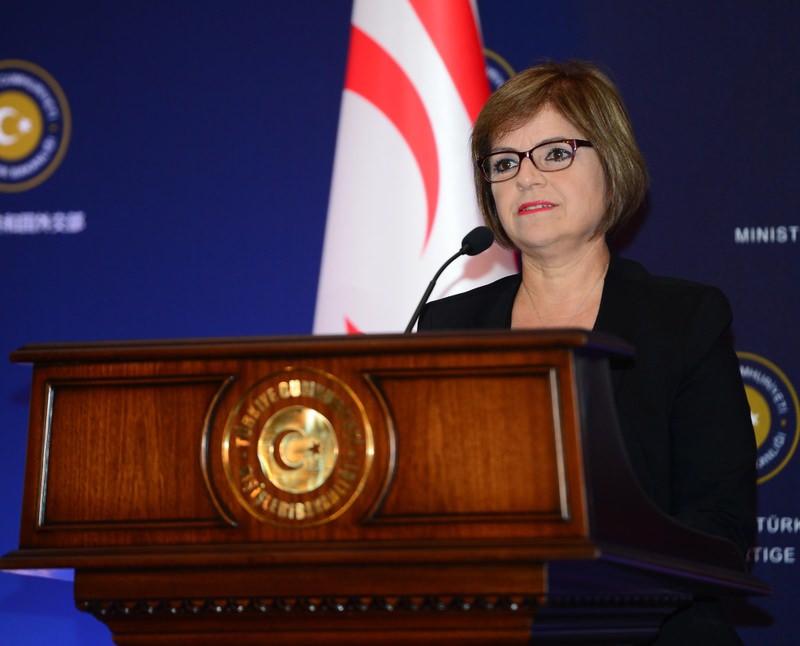 by Daily Sabah Aug 26, 2015 12:00 am
Foreign Minister Mevlüt Çavuşoğlu, in a press meeting held after bilateral meetings with the Turkish Cyprus Foreign Minister Emine Çolak yesterday, said Turkey supports the negotiation process on Cyprus to reach a fair and permanent solution on the island.

Acknowledging that the positive atmosphere on the island should continue at full steam, Çavuşoğlu underscored that both sides have the determination to expedite the negotiation process.

"We [Turkey] have high hopes after we saw progress in issues that had never reached an agreement before," Çavuşoğlu said, adding that the EU, international platform, Turkey and Greece supporting the negotiation process is significant.

The Northern Cyprus Water Supply project, as it is officially known, was wrapped up on Aug. 7 with the installation of the final part of the pipeline connecting Turkey to Turkish Cyprus. The project, the first underwater pipeline between the mainland and an island in the world, will address the chronic water shortage Turkish Cypriots have suffered from since the 1950s and is touted as a move to further accelerate the peace process on an island divided between Turkish and Greek Cypriots. It is also the first line physically connecting Turkey to Turkish Cyprus. Storing water from a river in Anamur, a district in the southern province of Mersin and Turkey's closest province to Cyprus, the pipeline will be a lifeline for nearly 300,000 Turkish Cypriots desperately in need of access to water. Turkish officials had already hinted that Greek Cypriots might benefit from the pipeline as well if peace talks between the two historically divided communities reunify the island.

Çavuşoğlu also said that Turkey's support for Turkish Cyprus on bilateral relations will continue: "We support Turkish Cyprus to develop the capacity of all institutions on the island. There is a broad-based government in Cyprus. We regard it as an opportunity for positive reforms and a long-awaited bill in the Parliament."

The Greek Cypriot government had unilaterally suspended reunification talks last October after Turkey issued an advisory on behalf of Turkish Cyprus for seismic research off the coast of Greek Cyprus.