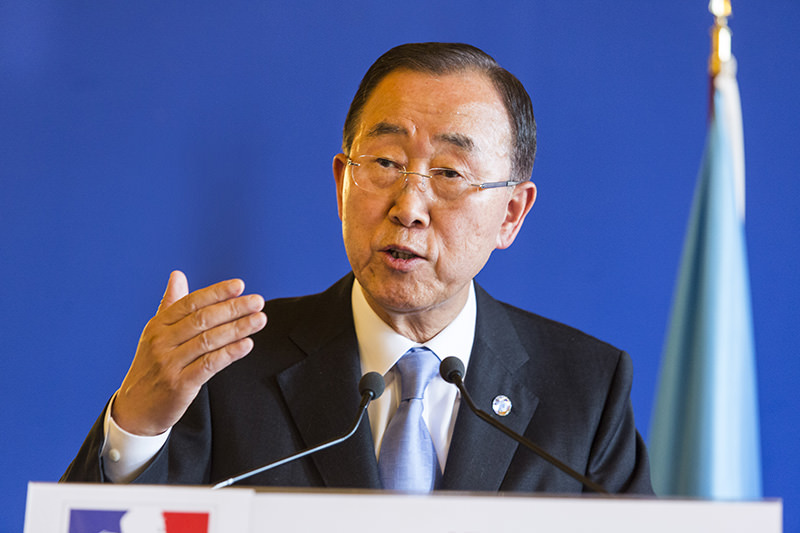 | AA Photo
by Daily Sabah with AA Sep 09, 2015 12:00 am
World leaders including the U.N. Secretary General Ban Ki-Moon have condemned the recent terrorist attacks carried out by the PKK in Turkey.

U.N. Secretary-General Ban Ki-moon on Tuesday condemned the PKK's recent terror attacks on Turkey that have killed dozens of soldiers and police since Sunday. "[Ban] conveys his condolences to the families of the victims and expresses his deep sympathy to the government and people of Turkey," read a statement issued by his spokesperson.

Thirteen police officers were killed Tuesday in a bomb attack by the PKK, which is listed as a terrorist organization by Turkey, the U.S. and the European Union. The attack in the eastern province of Iğdır came two days after 16 Turkish soldiers died in a roadside bomb attack in southeastern Hakkari.

"The secretary-general is gravely concerned by the increase in violence and urges immediate de-escalation of tensions and hostilities. He continues to monitor the situation closely, including its possible impact on the region," according to the U.N. statement.

Turkey has responded by launching airstrikes on PKK bases in northern Iraq and the army has sent ground troops across the border to track down those behind Sunday's blast, which was the deadliest since the PKK renewed its armed offensive at the end of July. On July 29, the U.N. chief said Turkey was exercising its right to self-defense as defined by the U.N. charter in its military operations against the PKK terrorist group. Article 51 of the charter allows countries to engage in self-defense against an armed attack.

Britain has joined the voices condemning recent terror attacks by the PKK in southeastern Turkey and called for an immediate end to the violence.

Minister for Europe David Lidington pledged his country's support to Turkey in combatting terrorism and said his thoughts were with the families affected.

"I condemn in the strongest terms the spate of recent terrorist attacks in Turkey, including the PKK attacks on Turkish security forces in Dağlıca and Iğdır this week," he said in a statement released by the Foreign Office.

"My thoughts are with the families of those killed and with the people of Turkey, as they come to terms with the tragic loss of life."

Sixteen Turkish soldiers were martyred by a roadside bomb in Dağlıca, Hakkari province, Sunday in the deadliest incident in the latest round of violence. On Tuesday, 13 police officers died in a similar attack in Igdir province.

Lidington said Britain would continue to fight terrorism with Turkey and called for an end to the PKK violence and a resumption of peace talks.

In Germany, government spokesman Steffen Seibert said Turkey had the "right and duty to defend itself against attacks." In a statement, he added that Germany encouraged a return to the "solution process" aimed at ending the Kurdish conflict.

Meanwhile, the EU also condemned the PKK's recent attacks in Turkey on Tuesday and called for an "urgent and unconditional cease-fire." European Commission spokeswoman Maja Kocijancic told a news conference in Brussels, "As we have said on many occasions in the past, we strongly condemn terrorist attacks by the PKK and call for an urgent and unconditional cease-fire on all sides in order to return to the negotiating table."

The U.S. embassy in Ankara has also condemned the PKK terrorist organization's recent attacks on Tuesday. A message on the U.S. embassy's official Twitter feed said: "We condemn the PKK's terrorist attack in Dağlıca, and extend our condolences to the families of those who lost their lives." "We stand with Turkey in the fight against terror, and repeat our call to the PKK - renounce violence and return to the peace process," it said.