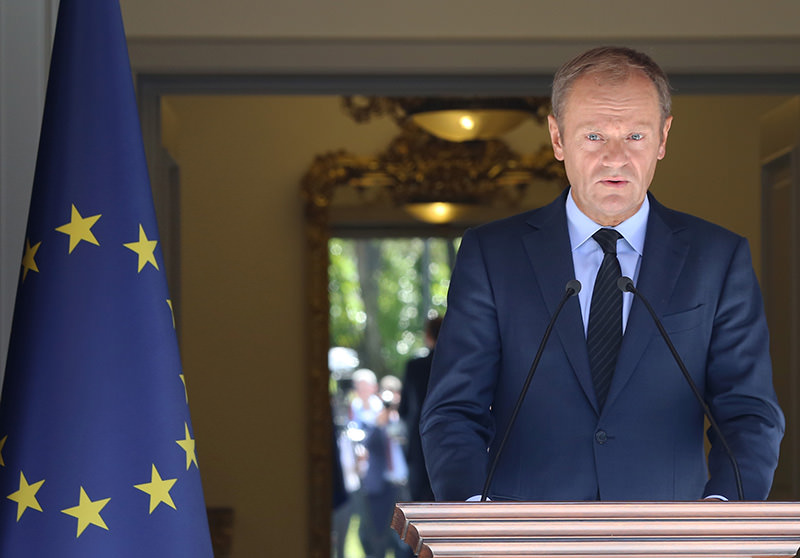 | AA Photo
by Daily Sabah Sep 10, 2015 12:00 am
The Delegation of the European Union to Turkey has released a statement on its web site on Wednesday, in which it said that it condemned the PKK's terrorist attacks as well as the recent attacks against media outlets and political party headquarters.

"To avoid a spiral of violence, the interim government and all political leaders need to come together to guarantee the rule of law in the country, to call for a ceasefire and to ensure secure and competitive early general elections," the statement said.

The European Council President Donald Tusk, who met Prime Minister Ahmet Davutoğlu on Thursday in Ankara, has made similar comments during a press conference held afterwards, saying, "The EU is determined in the struggle against PKK terrorism."

Donald Tusk had held a meeting the day before with President Erdoğan, after which he made the following remarks: "Terrorism, wherever it takes place, whomever it targets, and whoever bears the responsibility for it, must be strongly condemned."

Emphasizing that the European Union wants to cooperate closely with Turkey against terrorism, Tusk said that the EU will continue to be committed to fight against the PKK's presence in Europe.

"The ceasefire in 2013 between Turkey and the PKK was received with hope and relief by all EU countries. We continue to believe that this was the right choice: in fact there is no reasonable alternative," Tusk said.

Another point Tusk touched upon in his speech was the recent attacks on press organs and political parties' buildings in Turkey saying, "I hope that trust will again be restored, and the rule of law will prevail."

Nationalist demonstrators on Tuesday and Wednesday targeted dozens of offices of the Peoples' Democratic Party (HDP) in demonstrations following a succession of deadly attacks on the armed forces and police officers by the PKK terrorists.

Late Tuesday, a HDP office in the capital Ankara was attacked and torched while another branch in the southern city of Alanya was also set on fire.

Nationalists accuse the HDP of being the political wing of the PKK, which has killed dozens of members of the security forces in recent days. The HDP denies the allegation.

The headquarters of the Hürriyet and Sabah newspapers in Istanbul were also attacked on Tuesday.

Deputy Prime Minister Numan Kurtulmuş held a press meeting on Wednesday, during which he said, "It is unacceptable that political parties are attacked, we need to show our reactions in dignity," adding, "We condemn attacks on press institutions and investigations will be launched against those who undertake them."

"It is an out-and-out lie that the AK Party and government directed the attacks against HDP buildings."

Kurtulmuş said the AK Party, which is preparing for a Nov. 1 general election, was taking the "utmost care" to calm the situation.

"It is wrong to attack party buildings," he said, speaking at Anadolu Agency's Editor's Desk Wednesday. "Actual and physical attacks are vandalism, unlawfulness."

Prime Minister Davutoğlu has also condemned attacks on media, political parties, and civilian property and urged citizens to remain calm during the operations launched against the PKK terrorist group over his Twitter account on Tuesday evening.

"The objective of terrorism is to undermine our unshakeable, brotherly ties. Attacking the press and the property of political parties is unacceptable," he wrote on Twitter.