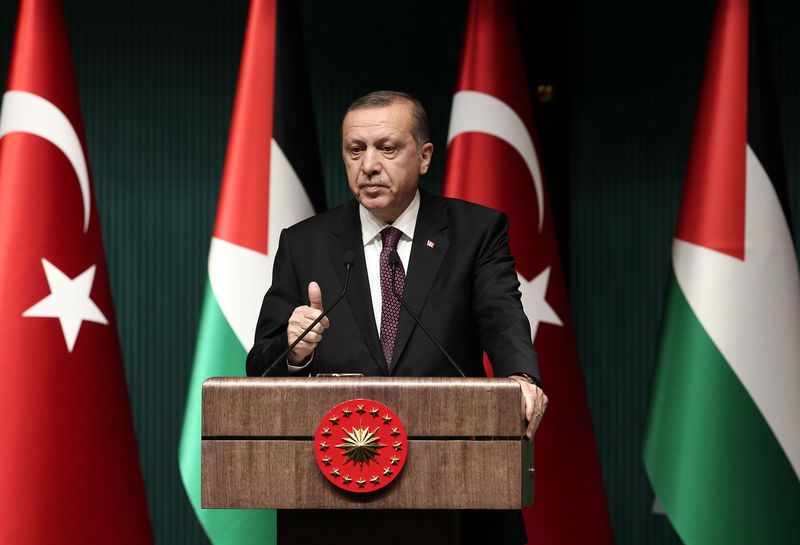 by Anadolu Agency
Sep 14, 2015 12:00 am
President Recep Tayyip Erdoğan sent a message of support to Turkey's Jewish community as they celebrated New Year Monday, while he condemned the Israeli raids over Al-Aqsa compound in east Jerusalem.

President Erdoğan called on the UN to act against the Israel's "breach" of Al-Aqsa Mosque in east Jerusalem, a presidency source said Monday.

In a phone conversation with UN Secretary General Ban Ki-moon, Erdoğan described Israel's actions as "unacceptable" and a cause for "serious indignation" in the Muslim world, according to the source, who spoke under customary condition of anonymity.

On Sunday and Monday, Palestinians and Israeli security forces clashed at the mosque - a revered site for both Muslims and Jews - resulting in dozens of injured casualties.

Erdoğan demanded the international community pressure Israel to accept the establishment of an independent Palestinian state based on pre-1967 borders with east Jerusalem as its capital.

According to the source, Ban said the UN was concerned by recent developments and reiterated the importance of peace negotiations for reducing tension.

The two leaders agreed that Israel's insistence on expanding Jewish settlements in Palestinian territory was against international law.

"We - the members of a tradition that sees differences as richness, gives great importance to fundamental human rights, offers opportunity to all ethnic and religious groups to live together in peace for centuries - are proud that all our citizens have the ability to freely live by their culture, religion and traditions," he said in a statement.

Jews around the world celebrated the Jewish New Year, or Rosh Hashanah, Monday.

Erdoğan said Turkey's celebrations were "among the richness of this region".

He also condemned Israel over the storming of Al-Aqsa Mosque compound in east Jerusalem.

"We strongly condemn the Israeli security forces' intervention at Al-Aqsa Mosque, which paved the way for the wounding of Muslims on Rosh Hashanah eve, and we are concerned about the persecution that this increased tension brings," he said.

Recep Tayyip Erdoğan met Meshal, the group's political chief, after violence erupted Sunday and continued into Monday at the site in east Jerusalem, which is revered by Jews and Muslims.

During the meeting in Ankara, Meshal thanked Erdogan for his sensitivity and support.

Erdoğan called for a "peace environment" such as that enjoyed by different religions in Turkey.

Dozens of Palestinians were injured Monday when Israeli security forces attacked Muslim worshipers inside the compound, according to witnesses.

On Sunday, several Palestinians were injured when Israeli soldiers forced their way into the complex-a holy site for both Jews and Muslims - and used teargas and rubber bullets to disperse Muslim worshipers.