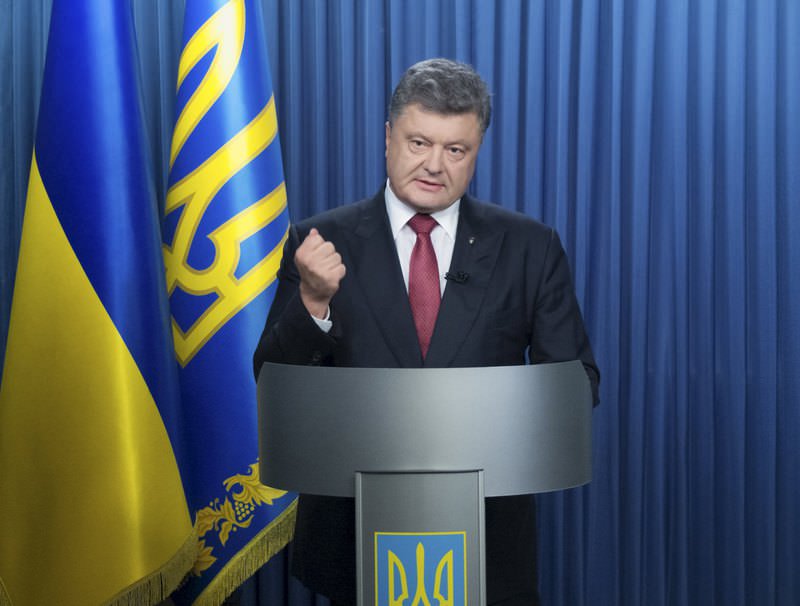 Ukrainian President Petro Poroshenko addresses the nation following clashes outside parliament in Kiev, Ukraine, August 31, 2015. (REUTERS Photo)
by Sep 16, 2015 12:00 am
Ukraine redoubled its long-shot bid Wednesday to see Russia stripped of its veto power on the UN Security Council when the global body's General Assembly meets in the coming weeks.

Numerous nations are upset with Russia for being one of the five permanent council members that together with China has blocked a series of UN efforts to impose sanctions on Syrian President Bashar al-Assad.

But Ukraine is especially angry at Moscow for shooting down UN attempts to condemn what Kiev views as Russia's "aggression" in its separatist industrial east.

Russia views Ukraine's 17-month crisis, which has already claimed nearly 8,000 lives, as a "civil war" in which it has played no role.

The United States along with Britain and France -- the other veto-wielding Security Council members and backers of Ukraine's pro-Western leadership -- have refrained from openly backing such a drastic measure against Russia and its unpredictable President Vladimir Putin.

Ukraine's parliament on Wednesday unanimously voted in favour of a recommendation for the United Nations to strip Moscow of its right to block Security Council resolutions in cases when "conflicts grow especially fierce".

Moscow swiftly dismissed the proposal and denounced Kiev's own push to expand veto rights to the other 10 non-permanent council members.

Ukraine hopes to be elected as one of the new rotating representatives at a vote in New York scheduled for October 15.

Gatilov called discussions about allowing the other 10 council members the right to block resolutions "premature".

The idea of imposing limits in extreme cases on a council members' right to torpedo legislation was initially proposed by French Foreign Minister Laurent Fabius in October 2013.

Moscow and Washington were then locked in an especially bitter standoff over Assad's alleged use of chemical arms.

Obama's deliberations were halted by a Congress decision to prohibit direct US military involvement in the devastated Middle Eastern state.

Russia had also promised to ward off any US attempt to win the Security Council's endorsement of such a campaign.

Fabius suggested that such disputes could be resolved more smoothly if the five big powers were to "voluntarily regulate their right to exercise their veto."

"The criteria for implementation would be simple: at the request of at least 50 member states, the United Nations secretary general would be called upon to determine the nature of the crime," Fabius wrote in an opinion piece for The New York Times.

"Once he had delivered his opinion, the code of conduct would immediately apply."

The initiative was later formally introduced by French President Francois Hollande at the UN and quickly supported by Mexico.