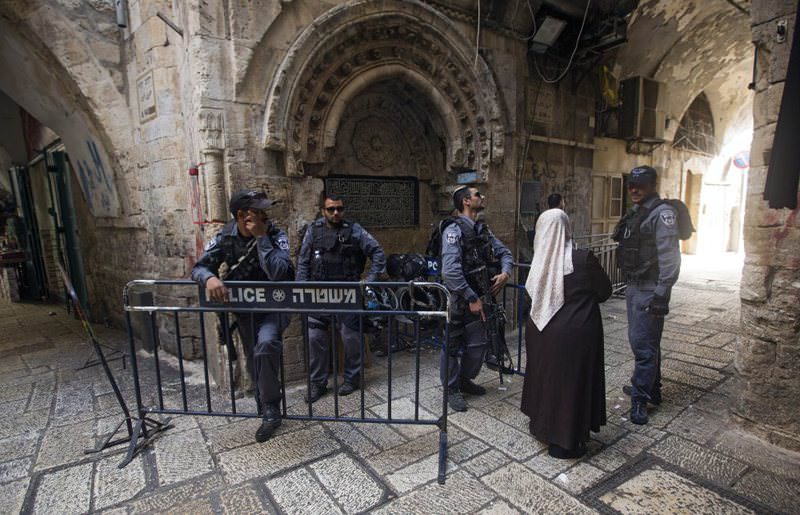 by Daily Sabah with AA Sep 17, 2015 12:00 am
President Recep Tayyip Erdoğan called on the Organization of Islamic Cooperation (OIC) to take an active role against Israel's breach of Al-Aqsa Mosque in East Jerusalem, a presidency source said Tuesday.

On Sunday and Monday Palestinians and Israeli security forces clashed at the mosque, which sits on a site revered by both Muslims and Jews, resulting in dozens being injured.

Dozens of Israeli forces on Tuesday forced their way into the flashpoint site for the third day in a row and attacked Muslim worshippers.

He said the Islamic world and international community should take a joint stance against such violations.

Salman agreed that Al-Aqsa Mosque raid was intolerable and Muslims could not be forcefully evicted from their sacred place of worship. He said the issue should also be taken to the U.N.

Tensions have been running high at Al-Aqsa Mosque complex after Jewish extremists called on followers to storm the mosque during Rosh Hashanah, the Jewish New Year.

For Muslims, Al-Aqsa is Islam's third holiest site. Jews refer to the area as the Temple Mount, as it was the site of two Jewish temples of antiquity.

Some extremist Jewish groups have called for the demolition of Al-Aqsa Mosque so that a new temple can be built in its place.

Erdoğan sent a message of support to Turkey's Jewish community as they celebrated Rosh Hashanah on Monday, while he condemned the Israeli raids of Al-Aqsa compound in East Jerusalem. He called on the U.N. to act against Israel's "breach" of the mosque. In a phone conversation with U.N. Secretary-General Ban Ki-moon, Erdoğan described Israel's actions as "unacceptable" and a cause for "serious indignation" in the Muslim world, according to the source, who spoke under customary condition of anonymity. Erdoğan demanded the international community pressure Israel to accept the establishment of an independent Palestinian state based on pre-1967 borders with East Jerusalem as its capital.

According to the sources, Ban said the U.N. was concerned by recent developments and reiterated the importance of peace negotiations for reducing tension.

The two leaders agreed that Israel's insistence on expanding Jewish settlements in Palestinian territory was against international law. "We, the members of a tradition that sees differences as richness, give great importance to fundamental human rights, offer opportunity to all ethnic and religious groups to live together in peace for centuries, are proud that all our citizens have the ability to live freely in accordance with their culture, religion and traditions," he said in a statement.

In September 2000, a visit to Al-Aqsa by Israeli politician Ariel Sharon in between his stints as foreign minister and prime minister sparked what later became known as the second intifada – a popular uprising against Israeli occupation in which thousands of Palestinians were killed.

Israel occupied East Jerusalem during the 1967 Six-Day War. It later annexed the city in 1980, claiming it as its capital in a move never recognized by the international community.
Last Update: Sep 17, 2015 1:33 am
RELATED TOPICS