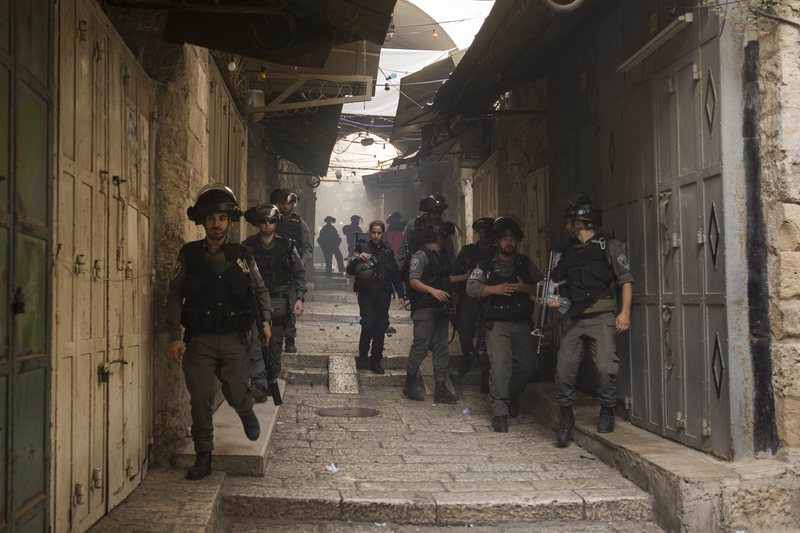 by Daily Sabah with AA Sep 17, 2015 12:00 am
Turkey's President Recep Tayyip Erdoğan expressed his "concern" over the recent Israeli assault on Al-Aqsa complex in Jerusalem in a phone call with French leader François Hollande on Thursday.

Presidential sources said Erdoğan made the call to take action over Israeli security forces' breach of the Muslim holy site, which sparked indignation in the Islamic world.

During the phone call, Erdoğan stressed the importance of founding of a sovereign Palestinian state with its capital in East Jerusalem on the grounds of Israel retreating to its 1967 borders.

Meanwhile, Hollande expressed France's concern regarding the developments in Jerusalem.

Dozens of Israeli soldiers on Tuesday forced their way into the flashpoint site for the third day in a row and attacked Muslim worshippers.

Tensions have been running high at Al-Aqsa Mosque complex after Jewish extremists called on followers to storm the mosque during Rosh Hashanah, the Jewish New Year.

For Muslims, Al-Aqsa represents the world's third holiest site. Jews, for their part, refer to the area as the Temple Mount, claiming it was the site of two Jewish temples in ancient times.

Some extremist Jewish groups have called for the demolition of Al-Aqsa Mosque so that a Jewish temple might be built in its place.

In September 2000, a visit to Al-Aqsa by controversial Israeli politician Ariel Sharon sparked what later became known as the Second Intifada – a popular uprising against the Israeli occupation in which thousands of Palestinians were killed.