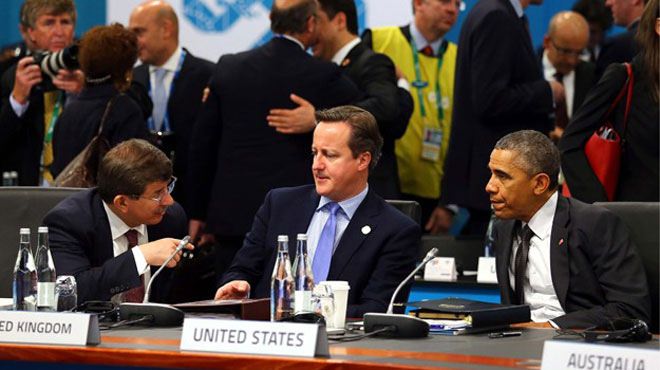 The U.S.'s unclear strategy for the heightening Syrian conflict is concerning for Ankara due to the worsening refugee crisis and threats from the Assad regime, ISIS and the PKK-affiliated PYD, which Washington said it does not recognize as a terrorist organization

Turkey and the U.S. have stood almost on the same line since the beginning of the Syrian conflict until it was seen that no action would be taken against Syrian leader Bashar Assad's regime after it crossed U.S. President Barack Obama's red line of using chemical weapons in the war-torn country. Since then, the Assad regime has continued its atrocities in regions held by opposition groups, which now receive almost no help from the international community. A year ago, Turkey and the U.S. agreed on a program to train and equip moderate Syrian opposition groups, but the program has so far turned out to be a failure with only a few fighters having been trained in a year. "It's a small number. ... We're talking four or five," Gen. Lloyd Austin, commander of the U.S. Central Command (CENTCOM) said, leading to heavy criticism and mocking from U.S. senators. Ankara consistently stressed the necessity of a no-fly zone, a safe zone and a solid program to train the internationally backed moderate opposition group, the Free Syrian Army (FSA). However, with the presence of the Islamic State of Iraq and al-Sham (ISIS) in Syria, the focus of Turkey's NATO allies started to be on the extremist group, and the Assad regime was no longer spoken about unless asked by the press or in confrontations between the U.S. and Russia.

Many analysts and diplomats have said that the Syrian regime's chaos led to the creation of ISIS, but the U.S.-led anti-ISIS coalition refrains from targeting the regime and keeps silent on the PKK's Syrian affiliate, the Democratic Union Party (PYD) in northern Syria, which has been accused of serious levels of ethnic cleansing against the Arab and Turkmen population.

Although the West started feeling the continuing unsolved crisis in Syria through inflows of refugees, there is still no proposed solution to the issue that leaves Syrians between the regime, ISIS or the PYD.

Washington stresses that there is a de facto no-fly zone in Syria, as regime forces refrain from disturbing the anti-ISIS coalition's air strikes. It has been criticized for indirectly cooperating with the Assad regime and not seeing it as the creator of the quagmire in Syria.

U.S. State Department spokesman John Kirby recently reaffirmed that Washington does not consider the PYD or its armed Peoples' Protection Units (YPG) to be a terrorist organization, drawing consternation from its NATO ally Turkey. Not long ago, State Department spokesman Jeff Rathke raised concerns over reports claiming demographic change committed by the PYD. When asked about claims of Arabs being pushed out of Tel Abyad after the PYD pushed ISIS from the area, Rathke said: "We have raised our concerns with the PYD about their human rights record, including intimidation of rival Kurdish political parties in the past."

These inconsistencies concern Ankara, which recently allowed the U.S. to use the İncirlik Air Base to hit ISIS targets in Syria.

In a recent Wall Street Journal article, two U.S. veterans, Bruce Windorski, 40, and Jamie Lane, 29, told the story of how they ended up with the YPG in northern Syria and what they think of other U.S. citizens joining the fight.

A combat veteran from the U.S. Marines, Lane appears to have regretted the decision to join the YPG, making his dissatisfaction known in the interview. "It's not what you're thinking. You're not going to fight ISIS. You're fighting for the revolution of Rojava," he said, revealing the PYD agenda of forming a state south of the Turkish border.

Ankara argues that the YPG received assistance from its affiliate, the PKK, which is listed as a terrorist organization by Turkey, the U.S. and EU, but since Turkey started hitting PKK targets in northern Iraq, the organization pulled some of its militants from YPG ranks. The timing of these developments happened when Syrian factions trained in Iraqi Kurdistan with Kurdistan Regional Government (KRG) peshmerga forces returned to Syria to join YPG ranks.

Davutoğlu to join counterterrorism summit hosted by Obama at UN

Prime Minister Ahmet Davutoğlu will join the counterterrorism summit hosted by President Barack Obama at the United Nations next week. He will reportedly explain how the worrisome situation in Syria may push displacement of a further 2 million people if ISIS gets hold of Aleppo and will re-propose Turkey's request of creating a safe zone in Syria near its border to avoid further civilian losses and refugee influxes to the country, which already is home to 2 million refugees, some of which die on their attempts to travel to EU countries.

While fighting the PKK, Ankara has also experienced terrorist attacks by various militant groups ranging from ISIS extremists to some extreme, communist Turkish groups based in Syria and backed by the Assad regime. Davutoğlu will reportedly explain that it expects its allies, especially the U.S., to not remain indifferent to terrorism and that the YPG's fight against ISIS will not make it legitimate since its fighters constantly shift to PKK ranks when necessary.
RELATED TOPICS