Turkey has broken the back of terrorist threats, PM Davutoğlu says 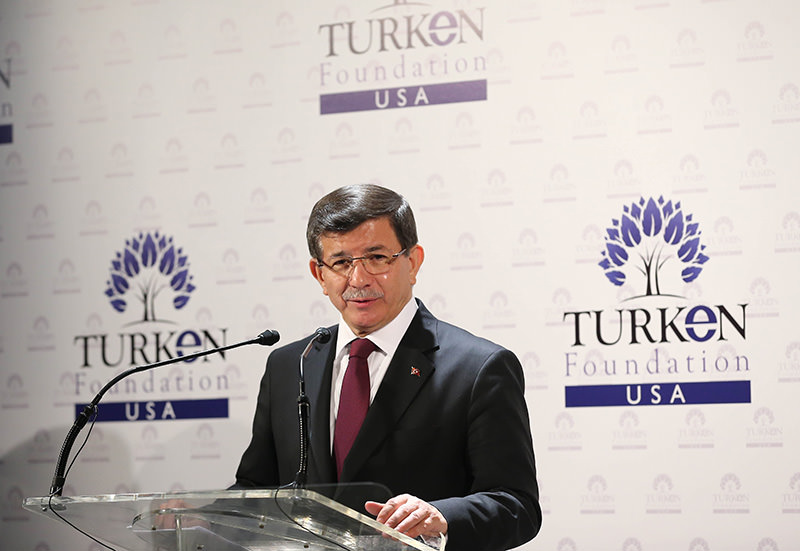 |AA Photo
by Daily Sabah with AA Sep 26, 2015 12:00 am
Prime Minister Ahmet Davutoğlu on Frıday attended a dinner hosted by the Turken Foundation - a New York-based non-profit organization that provides assistance to Turkish students – where he said Turkey was attacked by three terrorist groups, the ISIS, DHKP-C and PKK, simultaneously, between July 20 and July 23, and the response of Turkish security forces has been remarkable.

"I would like to express that, the simultaneous operations, as of today, has broken the back of terrorist threats facing Turkey," said during the dinner hosted by Turken Foundation.

The foundation also provides provides cultural, social and educational opportunities and experiences for the students, and helps promote cross-cultural relationships and understanding between various students' cultures and American culture and tradition.

"In northern Iraq, PKK shelters, ammunition depots and headquarters, and in Syria, all structures posing a threat by ISIS to our border have been largely neutralized. We also have come a long way towards maintaining public security and sovereignty," prime minister added, during the dinner where he met with representatives of the Turkish-American community.

"Our most important aim is to ensure the rule of democracy and public safety over the country as we get closer to November 1 elections," Davutoğlu said, referring to the rerun of the June general election, which saw no party win a simple majority.

Davutoğlu said Turkey would strengthen human rights and liberties while maintaining the balance between freedoms and security.

Formed in 1978, the terrorist group which also aims civilians in its attacks had been fighting the Turkish government for an independent state until the early 2000's. The group then shifted its goal to autonomy in predominately Kurdish inhabited regions of Turkey.

As part of a six-day visit to New York, Davutoğlu will also co-chair one of the six interactive dialogue sessions of the UN summit for the adoption of the post-2015 development agenda on Saturday.

A meeting with German Chancellor Angela Merkel is also scheduled that day.

He will deliver Turkey's statement for the summit on Sunday and is expected to hold meetings with UN chief Ban Ki-moon, Iranian President Hassan Rouhani, Jordan's King Abdullah II and Belgian Prime Minister Charles Michel. He will conclude the day with a meeting with Turkish citizens residing in the U.S.

Davutoğlu is expected to hold a press conference at the UN headquarters on Monday, the day when the annual "general debate" at the UN General Assembly begins. On the margins of the marathon debate, he will attend a UN peacekeeping summit hosted by U.S. President Barack Obama.

On Tuesday, the Turkish prime minister is expected to hold financial talks with foreign investors and businessmen, and attend a meeting co-organized by the Union of Chambers and Commodity Exchanges of Turkey and the U.S. Chamber of Commerce.

He will participate in a counterterrorism summit, also hosted by Obama. He may also meet with EU Council President Donald Tusk.

On Wednesday, the final day of his trip, Davutoglu will hold a press conference with UN Secretary-General Ban Ki-moon to promote the 2016 World Humanitarian Summit, which will take place in Turkey. The first-ever global humanitarian summit of this scale will seek to find new ways to tackle the world's humanitarian needs.