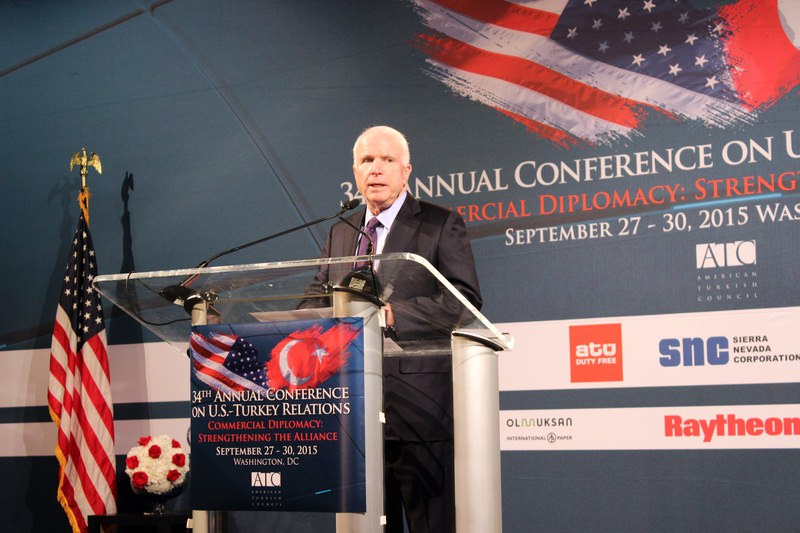 The Republican senator also said he hopes Turkey would pursue weapons capabilities that could be integrated into a stronger defense network for NATO for regional stability in the Middle East.

Speaking at the 34th annual meeting of American Turkish Council, McCain stressed that the partnership between the U.S. and Turkey was more important than ever due to the ongoing conflict in Syria and Iraq.

The senator noted that Turkey - as a member of NATO - had committed not only to the collective self-defense and security of all NATO allies, but to safeguard the common values as well.

"The enduring value of our alliance has been made clear in recent years as the United States and Turkey have worked together to counter ISIS," McCain said.

He said Turkey's recent decision to assist in the fight against ISIS by allowing the use of the Incirlik Air Base, had "significantly improved" the combat capabilities to counter the militants.

The air base was opened in July after the U.S. reached an agreement with the Turkish government for expanded operations against ISIS.

McCain said a "coherent regional strategy" needs be adopted to ultimately destroy ISIS, who has benefited from an almost unstoppable flow of foreign fighters.

U.S. intelligence fears that nearly 30,000 foreign fighters have traveled to Iraq and Syria since 2011 to join ISIS, according to The New York Times.

"I agree with Turkey's government that in order to succeed in destroying ISIS, we must also force Assad to leave power and end the conflict in Syria."

The U.S. is leading a coalition of more than 60 countries, including Turkey, to combat ISIS in Syria and Iraq.

Calling ISIS the "bastard child" of Assad, McCain said further cooperation was needed between the U.S. and Turkey by establishing safe zones for the protection of hundreds of civilians in Syria.

According to the UN, Turkey has hosted nearly 2 million refugees since the conflict began four years ago.
Last Update: Sep 29, 2015 1:52 am
RELATED TOPICS