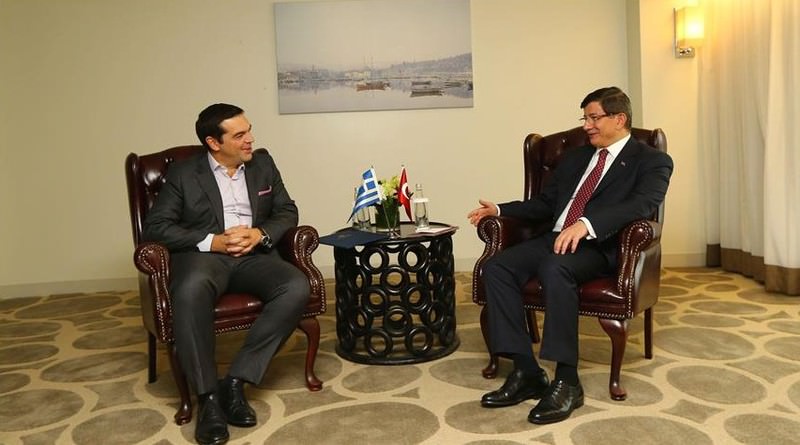 by Daily Sabah with AA Sep 30, 2015 12:00 am
Prime Minister Ahmet Davutoğlu met with his Greek counterpart Alexis Tsipras in New York on Tuesday.

The meeting, which was closed to the media, was on the margins of the United Nations summit in New York.

Prime Ministry sources said the two leaders agreed to enhance cooperation to implement projects aiming to ease the plight of Syrian refugees, vast numbers of whom have crossed the Mediterranean Sea this year.

During the meeting, Davutoğlu also expressed Turkey's readiness to offer every kind of support to help its neighbor overcome its ongoing financial crisis, sources said.

Speaking to journalists from Turkey in New York on Sunday, Davutoğlu said Tsipras had called him last week to arrange a meeting on the refugee issue, adding Greece might be included to the work group formed between Turkey and Germany.

A main entry-point for refugees to Europe has been the narrow waterway between Turkey and the Greek islands, which saw 192,000 arrivals since August, according to the U.N.

Turkey, which pursues an open-door policy for Syrians and hosts more than 2 million refugees affected by the civil war, now struggles to stop the flow of refugees into European countries. Every day, dozens of refugees risk their lives and board boats to cross to the Greek islands, the nearest gateway to Europe from Turkey.

The Izmir Governorship released data on Monday claiming that 54,255 refugees have been rescued from Aegean waters while 116 bodies have been found and 69 human traffickers arrested since Jan. 1 of this year.

Worldwide shock emerged upon the publishing of the image of three-year-old Syrian toddler Aylan Kurdi, whose lifeless body washed up on a Turkish beach, after a dozen Syrian refugees, including eight children, drowned en route to Greece.

"We are ready to do what is necessary as best as we can in cooperation in areas including tourism, energy and trade," said Davutoğlu during a press meeting in June, adding that Turkey will contact the Greek government to hold a high-level cooperation council meeting as soon as possible to brainstorm solutions to the financial crisis after the new Turkish government is formed.