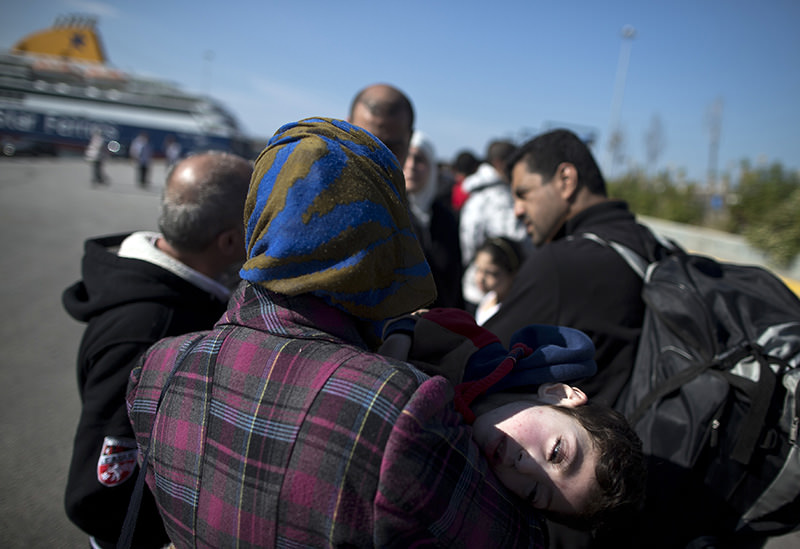 Syrian refugees wait for a bus after they arrived by ferry from Lesbos island to the port of Piraeus, near Athens, on Tuesday, Oct. 6, 2015 (AP photo)
by Yunus Paksoy
Oct 06, 2015 12:00 am
A draft action plan to step up cooperation between the EU and Turkey on the refugee crisis that has overwhelmed EU member states was released on Tuesday. The plan will allow Turkey and the EU to better cope with the refugee burden, with the EU intending to mobilize up to 1 billion euros for Turkey. The details of the plan, however, are still open to negotiation between both parties.

The draft action plan with short- and medium-term measures seeks to address the unprecedented refugee crisis by strengthening collaboration between the EU and Turkey in two parts under which the EU intends to mobilize up to 1 billion euros for 2015-16 to support Turkey while Ankara intends to step up cooperation with Bulgarian and Greek authorities and open six refugee reception centers.

According to the first part of the plan, Turkey and the EU will share the refugee burden and create better living circumstances for refugees already in Turkey. In addition, both parties accept to address key factors that cause the refugees to move from Turkey to the EU through irregular channels. Moreover, the EU also intends to support existing member state and EU resettlement schemes and programs, which could allow refugees in Turkey to enter the EU legally.

As for the second part of the plan, Turkey and the EU will work to prevent the flow of irregular refugees to Turkey and departures of irregular refugees and migrants from Turkey to the EU. While the fight against criminal networks involved in smuggling migrants will be stepped up, there will be further measures against casualties at sea. In addition, Turkey will seek to further intensify cooperation with the European Agency for the Management of Operational Cooperation at the External Borders of the Member States of the European Union (Frontex).

The EU praised Ankara's efforts, saying: "Turkey is making commendable efforts to provide massive humanitarian aid and support," and cited that more than 6.75 billion euros has been spent by the Turkish government on the issue.

It was declared that the implementation of the draft action plan is set to start immediately and will be monitored by the European Commission and the Turkish government. In addition, the implementation of the plan is said to accelerate the visa liberalization process as both President Recep Tayyip Erdoğan and European Commission President Jean-Claude Juncker agreed on Tuesday. The plan is also expected to boost relations between Turkey and the EU should both parties fulfill what is required of them.

Juncker handed the draft action plan to Erdoğan on Monday. With both sides agreed to the plan in principal, it still remains to be seen whether there will be any difference of opinion on the details.

Speaking at a joint press conference with European Council President Donald Tusk, Erdoğan called on the EU to take responsibility. "From the very beginning Turkey shouldered this responsibility on behalf of the international community. We see more recently that EU countries are coming face to face with the Syrian crisis," he said.

Ankara stresses that the crisis cannot be solved completely because Syrian President Bashar Assad and his regime are still present in the country, and along with financial support for the countries taking in refugees, European countries must take them on a humanitarian basis, disregarding their professions or religion.
Last Update: Oct 07, 2015 5:53 pm