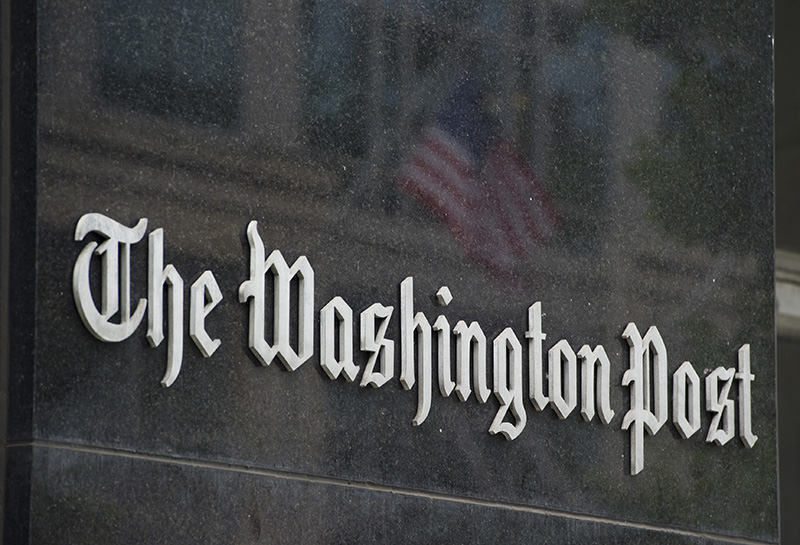 This August 6, 2013 file photo shows a sign outside of the Washington Post Building in Washington, DC (AFP Photo)
by Daily Sabah with AA Oct 07, 2015 12:00 am
Turkey's ambassador to Washington said Tuesday that portraying operations against the PKK as a way to garner votes ahead of elections next month "echoes the terrorist organization's propaganda."

Serdar Kılıç's comments came in response to an Oct. 1 editorial in the Washington Post that accused Turkey's President Recep Tayyip Erdoğan of "destabilizing the nation in his quest for more power," referring to the resumption of operations against the PKK in July.

It also claimed that the Turkish military broke a two-year cease-fire with the terror group after Turkey agreed to take part in U.S-led coalition air strikes against ISIS.

"The continued acts of terrorism by the PKK, even during the peace process, lie at the heart of Turkey's recent actions to defend its citizens and public order," Kılıç said. "To portray these as an ill-conceived attempt of the government to win the upcoming elections distorts the facts and echoes the terrorist organization's propaganda," he continued.

The governing Justice and Development Party (AK Party) launched a democratic reconciliation process in 2009 that aimed to achieve a peaceful solution to the Kurdish issue and to end PKK terrorism.

After that, casualties from the conflict between the PKK and Turkish armed forces were minimized, and the government lifted bans on the Kurdish language as well as allowed the intelligence service to talk to the terrorist group's leader, Abdullah Öcalan, who is imprisoned on İmralı Island.

Kılıç said in his letter to the Washington Post that it was the PKK that declared an end to the peace process in July after it claimed responsibility for killing two Turkish police officers in the southeastern province of Adıyaman.

Turkish security forces have killed more than 2,000 PKK members in operations inside Turkey since July 22, according to the Interior Ministry.

"No responsible government could be expected to refrain from taking action while its law enforcement personnel and civilians are being murdered by a terrorist organization that is designated as such by the international community, including the United States and European Union," Kılıç said.

As the Turkish parties could not form a coalition government following the June elections in which the AK Party lost its majority in Parliament and ability to establish a single party government, Erdoğan called for snap elections to be held on Nov. 1.

In addition to the political impasse, Turkey has been grappling with several other problems, including the fight against ISIS, the continuing refugee influx and PKK terrorism.

Turkey agreed to join U.S.-led coalition air strikes against ISIS in late July and allowed American jets to fly from İncirlik Air base in the southern province of Adana in early August.

At the very same time the PKK intensified its attacks in eastern and southeastern cities and towns.

The Turkish government has intensified its counter-terror operations following recent attacks carried out by the PKK.

Formed in 1978, the terrorist group had been fighting the Turkish government for an independent state since the early 2000s. The group then shifted its goal to earning autonomy in predominately Kurdish inhabited regions of Turkey.
Last Update: Oct 07, 2015 1:40 pm
RELATED TOPICS