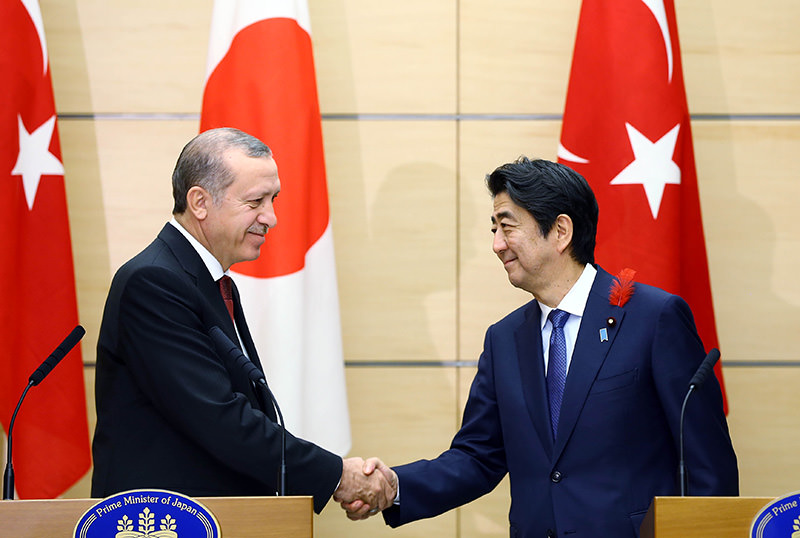 by daily sabah
Oct 08, 2015 12:00 am
Turkey and Japan will establish a joint university in Istanbul, Turkish President Recep Tayyip Erdoğan said in a joint press conference held with the Japanese Prime Minister Shinzo Abe in Tokyo.

Abe stated that Erdoğan and he have a deep friendship and good memories from 2013 at the inauguration of Marmaray rail tunnel that crosses the Bosporus in Istanbul. Japanese PM said he was happy to host Erdoğan at the 125th anniversary of the Ertuğrul Frigate disaster, in which more than 500 Turkish sailors died off Japanese coast during their return to the Ottoman Empire after the Empire's officers made their first official visit to Japan in 1890. Abe also touched upon Turkey's role in rescuing 215 Japanese citizens from Tehran during Iran-Iraq War in 1985.

Additionally, Prime Minister Abe underlined Turkey's efforts for Syrian and Iraqi refugees, stating that Japan will continue to work with Turkey for the peace and stability of Middle East.

President Erdoğan started his words by thanking young pupils in Japan's Oshima Elementary who have been carrying out the maintenance of Kushimoto Ertuğrul Memorial, a monument to commemorate the sailors of the Ottoman frigate Ertuğrul. Erdoğan stated that he and Abe were on the same page regarding key international issues, especially terrorism, adding that he and Abe will again come together on November 13 in Istanbul, before the G20 Leaders' Summit in Antalya on November 15 and 16.

Erdoğan also noted that infrastructure works for the Turkish-Japanese Science and Technology University were ongoing and a 1,000 decare of land was spared in Istanbul for this project.
Last Update: Oct 08, 2015 5:21 pm