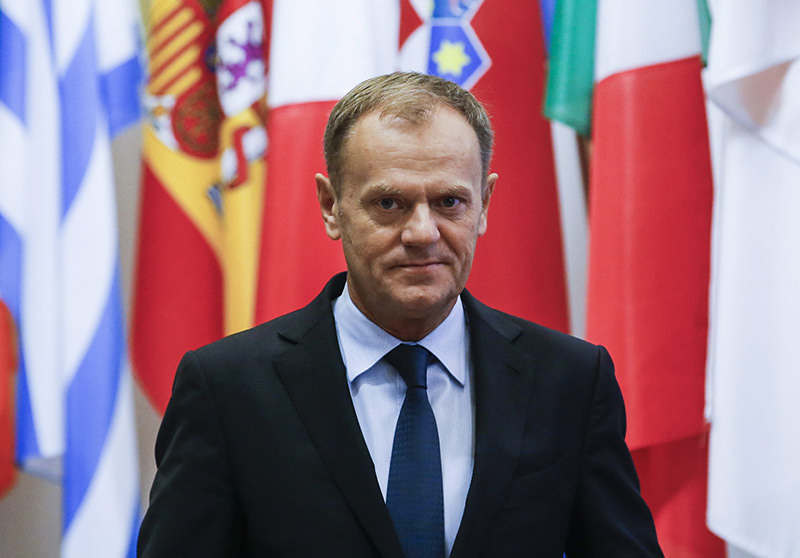 by Daily Sabah with Wires
Oct 14, 2015 12:00 am
European Council President Donald Tusk warned Turkey on Tuesday that it will only win concessions from the EU, such as easier travel visas, if it successfully reduces the flow of refugees reaching Europe.

In a letter to EU leaders setting the agenda for a summit he will chair in Brussels on Thursday, Tusk said negotiations will start this month on the migrant crisis with Turkey, which EU officials say wants more visa waivers, more EU funding and progress on its longstanding application to join the bloc.

"An agreement with Turkey makes sense if it effectively reduces the inflow of refugees," Tusk wrote on the eve of a visit by senior European Commission officials to Ankara. "Concessions will only be justified when this goal is achieved."

Tusk's statement came after he wrote on his Twitter account on Tuesday of last week: "We have to count mainly on ourselves. Our neighbors have bigger problems. Some use refugees for dirty business or political bargaining chip."

Tusk, a conservative former prime minister of Poland, is trying to steer the divided 28-nation European Council toward consensus on proposals put forward by the executive European Commission. He visited Turkey last month and hosted Turkish President Recep Tayyip Erdoğan on a visit to Brussels last week during which the European Commission set out various ways in which Ankara could help control migration.

Tusk warned of a "long march" toward greater cooperation with countries in the Middle East that have taken in millions of Syrian refugees and highlighted how Russia's new military action in Syria, at odds with Ankara's calls for EU support to establish "safe zones" in the north, added to complexities in the region.

"We must be ready for spring and the threat of bigger waves flowing to Europe," he said, noting warnings from regional leaders that "millions" more migrants could start heading for Europe.

"As exaggerated as this opinion may sound, it is our obligation to be prepared for all scenarios," Tusk said. He said leaders should consider changes to the Dublin system, which makes border states responsible for asylum, and strengthen EU borders, possibly by creating a European Union border guard force.

By Monday afternoon, more than 590,000 migrants and refugees had reached Europe by the Mediterranean Sea this year, while some 3,100 had lost their lives trying to do so, according to the International Organization for Migration. It is the largest population movement Europe has had to grapple with since World War II.

More than half of those arriving are from Syria, according to the U.N. High Commissioner for Refugees (UNHCR). Almost five years of conflict in Syria have left the Middle Eastern country in tatters and displaced more than half of its pre-war population of 22.4 million.

The recent start of Russian airstrikes in the country has complicated the situation even further and raised the specter of many more Syrians fleeing to seek protection elsewhere.

"We should be talking about millions of potential refugees trying to reach Europe from Syria alone, not to mention Iraq, Afghanistan, Eritrea and other places," Tusk said after the bloc's 28 national leaders held a special summit last month.

The EU is obliged under international law to offer asylum to those who arrive on its territory qualifying for protection.

The number of people it has taken in is relatively small compared to what Syria's neighbors have had to contend with, but the influx has nevertheless strained European resources and stoked political tensions between differently affected EU countries.

The bloc's focus has thus shifted toward keeping refugees in camps near Syria and better protecting external EU borders, notably to sift out economic migrants who do not qualify for asylum.

"European leaders are only beginning to get a grip on the continent's migration crisis," Cornelius Adebahr of the Carnegie Europe think tank said after the last summit, which he said "merely mended broken fences over how to handle [the] huge influx of refugees."

The EU has submitted a proposal to Turkey for a migration action plan that it was hoping to firm up in time for this week's summit.

But negotiations were delayed by a terrorist attack in Ankara that killed almost 100 people and injured hundreds more over the weekend. Expectations are also low that Ankara will make any major decisions ahead of the Nov. 1 parliamentary elections.

The EU is nevertheless expected to seek some form of progress in conjunction with the summit.

"All the ingredients to build ... trust and confidence with our Turkish partners are there," European Commission spokesman Margaritis Schinas said on Monday. "Now is the moment ... to take this discussion to the political level."

"It is very clear that [the] EU and Turkey share now more than ever a common agenda when it comes to the security and the stability of the region and peace in the region," EU High Representative for Foreign Affairs and Security Policy Federica Mogherini added.
Last Update: Oct 14, 2015 3:19 pm