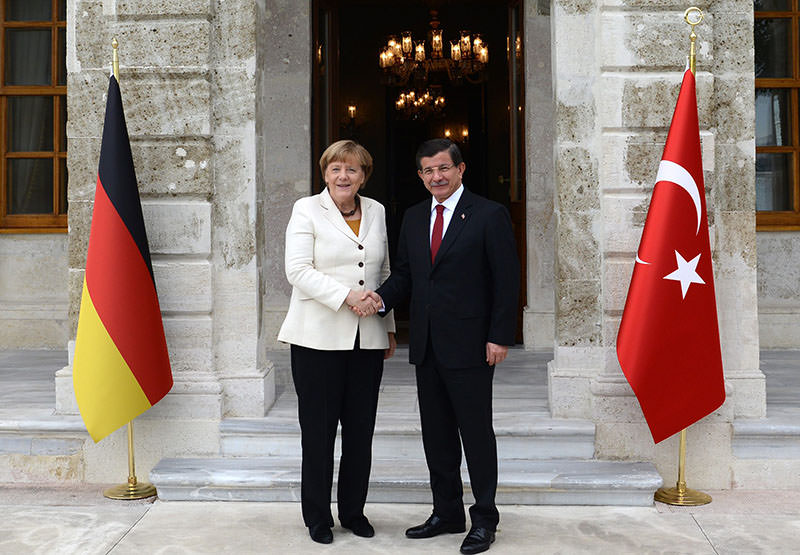 Over the course of the last four years since the Syrian civil war began, Turkey has become one of the few countries to bear the heavy burden of numerous refugees while the European Union has so far failed to address the biggest refugee issue since World War II. For this reason, the most influential EU head of government, German Chancellor Angela Merkel, paid a visit to Turkey on Sunday in order to convince Ankara to collaborate with the EU.

German Chancellor Merkel met with President Erdoğan at Mabeyn Mansion in Yıldız Palace and the two made a joint press statement after the talk.

Erdoğan indicated that they discussed several topics in Turkey's negotiations with the EU and said: "I have asked for support especially from countries like Germany, France, Britain and Spain. One of the important topics is both the current situation of refugees in Turkey and their moving to the West."

He said Merkel declared her support for shouldering the burden that Turkey has assumed and added: "She said, 'We need to help Turkey on this issue.' "

Speaking at a joint press conference at Dolmabahçe Palace, Prime Minister Ahmet Davutoğlu and Merkel shared the details of their meeting. Citing that Turkey and Germany are two friendly and allied countries working closely on political and economic issues, Davutoğlu said that he conveyed Ankara's concerns regarding the humanitarian tragedy in Syria for which no solution has been found for five years.

Davutoğlu praised Merkel's courage to not turn a blind eye to the refugee crisis unlike other heads of states in the EU that wanted to keep refugees out of their countries, and said: "There is a joint working group between Turkey and Germany that will do its best to find a mutual solution to the problem."

Naming four main topics discussed during the meeting, Davutoğlu said: "The first topic is the fair share of the refugee burden. Turkey has been left alone in the last four years on the issue of sharing [this] burden. The process hereafter should be carried out together irrespective of [the possible financial aid to Ankara from the EU of] 3 billion euros."

Davutoğlu cited visa liberalization as the second topic. Stressing that the EU drew a new framework on the visa issue that has been ongoing for decades, Davutoğlu said: "For us to sign the readmission agreement, the Schengen visa must be secured for Turkish citizens. We are performing serious collaboration with the EU to realize this issue by 2016 rather than as planned in 2017. We hope that from July 2016 both readmission and Schengen agreements will go into effect."

For the fourth topic, Davutoğlu said that Turkey joining EU summits is a significant point, which he hoped would continue in the upcoming years. Underscoring that the last Turkish politician to have been present at an EU summit was President Recep Tayyip Erdoğan when he was prime minister, Davutoğlu said: "We hope that Turkey appears in the EU picture."

After Davutoğlu's speech, Merkel reflected her views following the meeting. Emphasizing that Germany and the EU will provide support of any kind to Ankara on four topics, she said: "New meetings will be held on the visa issue. We [Germany and the EU] have some expectations from Turkey regarding the refugee crisis."

Acknowledging that Turkey has carried the burden of refugees financially, Merkel said: "We know that Turkey has not received much aid for this issue. In fact, Turkey has undertaken a great task. I can also say that the EU will work on legal migration."

Labeling Turkey's accession to the EU as an open-ended issue, Merkel said that the EU is ready to negotiate Chapter 17 while Davutoğlu said both parties agreed on the same terms to accelerate efforts on Chapters 17, 23 and 24.

Commenting on the possible visa liberalization for Turkish citizens, Ceyhun said: "The envisaged date is clear. This is our objective. The EU has seen, following Davutoğlu's remarks, that it is no joke. We can see this in Merkel's words when she said, 'We should keep our promises that we have so far failed to keep.' "

Underscoring that the EU report on Turkey is to be the first test, Ceyhun said: "Merkel will tell EU member states what she discussed here in Turkey. The report is much more important than opening chapters for negotiation."

When asked about how the public should see the messages given at the press conference, Ceyhun said he considers the meetings and remarks 100 percent positive adding that Ankara and the EU along with Germany have failed to communicate properly for a long time.

Unable to cope with the influxes of refugees coming on a daily basis, EU member states have agreed to ask for Ankara's help, a longstanding EU partner that has been neglected until the EU acknowledged its indispensable significance in solving the problem, and was the reason behind Merkel's sudden visit to Turkey.

German media outlets have changed their discourse about Erdoğan and Turkey in their articles after the EU expressed its intention to work with Ankara more closely. Having earlier criticized Erdoğan for allegedly trying to run the country with an authoritarian approach, media in Germany portrayed him as a gatekeeper who should be convinced and given concessions in order to better control Turkey's borders and prevent the flow of refugees to a certain extent.

It still remains a question whether the EU will provide the requested concessions in an attempt to convince Ankara to cooperate with its member states. However, Davutoğlu reiterated his previous remarks by firmly stating that Ankara will not agree to the readmission agreement unless some concrete steps are taken.

The pros and cons of a possible action plan will continue to be discussed in the media, yet Ankara prefers to kill multiple birds with one stone. Feeling alone due to the heavy burden of the refugee crisis, Turkey has spent over $7 billion and has failed to make itself heard in the international area. For now, the EU seems to be listening to Ankara, which could ease the burden of the refugee crisis of which Turkey has been most affected.