EU and Turkey close to agreeing on refugee, membership and Cyprus issues 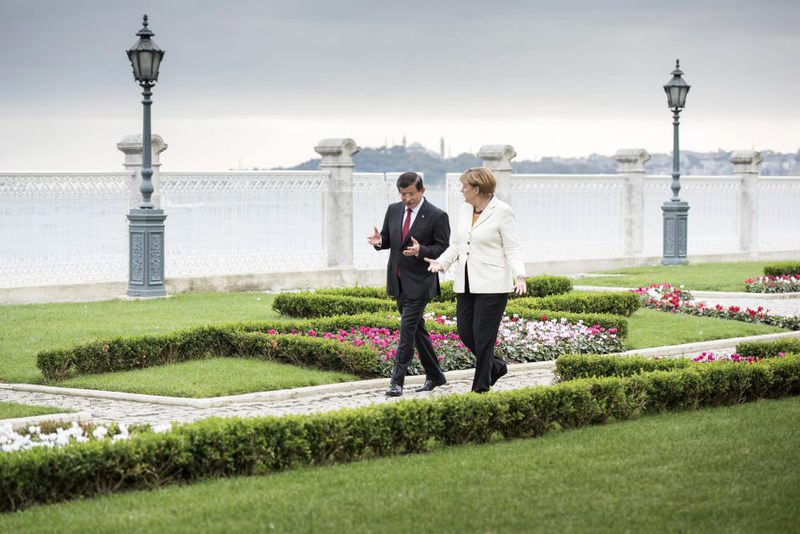 Ankara is in the home stretch of EU visa liberalization by accepting the readmission agreement on the increasing influx of refugees, while the years-old deadlock on Cyprus, which has been a major obstacle, is expected to be resolved soon

The deal between Turkey and the EU is on the brink of being implemented in June 2016, following the never-before-seen possibility to resolve the longstanding deadlock on Cyprus, as one senior official reportedly said in a meeting with journalists on Monday. The deal includes Ankara accepting the readmission agreement for Syrian refugees and the EU providing financial support for shouldering the refugee burden while visa liberalization and opening of several chapters in EU accession negotiations with Turkey will be put into practice.

Since the beginning of the four-and-half year crisis, EU countries have faced a refugee influx that has become a problem they have been unable to cope with. According to the official, visa liberalization will be applied for Turkey as of June 1, 2016 and during her visit to Turkey on Sunday, Oct. 18, German Chancellor Angela Merkel accepted the issue going into effect.

Speaking at a joint press conference with Merkel at Dolmabahçe Palace, Prime Minister Ahmet Davutoğlu mentioned visa liberalization as one of the topics at the meeting and stressed that the EU drew a new framework on the visa issue, which has been ongoing for decades.

He said: "For us to sign the readmission agreement, the Schengen visa must be secured for Turkish citizens. We are performing serious collaboration with the EU to realize this issue by 2016 rather than as planned in 2017. We hope that from July 2016 both readmission and Schengen agreements will go into effect."

In December 2013, Turkey and the EU signed an agreement on a visa liberalization dialogue in parallel with a readmission agreement that would result in illegal migrants who enter the EU from Turkey being returned to Turkey. Ankara is insistent on a synchronized step for both the readmission and Schengen visa agreements.

Implementing the agreements requires the confirmation of all EU-member states and the blockade that has been put up by Greek Cyprus since the beginning of Turkey's negotiations with the EU remains a crucial point. At this point, the reunification of Turkish and Greek Cyprus has become very important for Turkey's dialog with the EU.

The senior official said that the reunification of the two sides of Cyprus is about to be realized in March 2016, with the solution on Cyprus closer than ever since Turkish officials gave positive signs regarding bilateral talks that had resumed after breaking down in February 2013.

Speaking during his visit to New York for the U.N. General Assembly meeting on Oct. 3, Turkish Cypriot President Mustafa Akıncı said they are in efforts for a solution in which both sides win and will bring stability to the region.

"There are parliamentary elections in Greek Cyprus this coming May and that is their domestic issue. If we continue to work hard, we might attain a solution before these elections," he said.

Akıncı told the press in June that the "United Cyprus Federation" is a possible new name for a unified Cyprus upon successful resuming reunification negotiations between Greek and Turkish Cyprus.

Yet Greek Cyprus said it does not favor lifting objections to Turkey's EU-bid, as Greek Cypriot Foreign Minister Ioannis Kasoulides told Greek state broadcaster NET: "As things presently stand, we cannot give our consent." He referred specifically to two chapters, or policy areas, in accession negotiations pertaining to judiciary and fundamental rights, and justice, freedom and security.

On top of that, Turkey refuses the criticism, and claims that the situation of Syrian refugees has become a bargaining chip for it against the EU. Speaking to journalists on Oct. 16, Foreign Minister Feridun Sinirlioğlu pointed to remarks labeling the issue as a bargain that Turkey will keep Syrian refugees in the country in exchange for large amounts of money, and said: "That is completely false. The financial support will be implemented for Turkey supporting Syrians in desperation and misery. Sharing the burden also means that." Although European Council President Donald Tusk wrote: "We have to count mainly on ourselves. Our neighbors have bigger problems. Some use refugees for dirty business or as a political bargaining chip," on his Twitter account Tuesday last week, later, on the eve of a visit by senior European Commission officials to Ankara, he said: "An agreement with Turkey makes sense if it effectively reduces the inflow of refugees. Concessions will only be justified when this goal is achieved." EU critics argued that Tusk's tweet exposes the EU's "dirty business" in efforts to solve the refugee crisis.

By Monday afternoon last week, more than 590,000 migrants had reached Europe by the Mediterranean Sea this year and some 3,100 had lost their lives trying to do so, according to the International Organization for Migration. It is the largest population movement Europe has had to grapple with since World War II. The EU has submitted a proposal to Turkey for a migration action plan that it was hoping would firm up in time for last week's summit. But negotiations were delayed by a terrorist attack in Ankara that killed over 100 people and injured hundreds more. Expectations are also low that Ankara will make any major decisions ahead of the Nov. 1 parliamentary elections. The EU is nevertheless expected to seek some form of progress in conjunction with the summit.