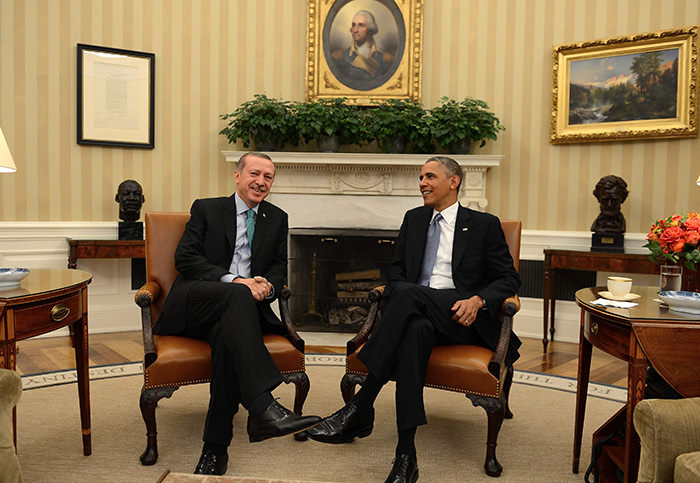 |AA Photo
by Daily Sabah Oct 21, 2015 12:00 am
A former Republican member of the United States House of Representatives from Indiana criticized U.S. President Barack Obama's foreign policy approach, in a Washington Times article published on Oct. 19, for 'appeasing the country's enemies and alienating its friends', calling it a doctrine of 'chaos'.

The Republican House member said that the Obama administration failed to handle the events in Egypt, Libya, North Korea, in addition to recent crisis in Iraq and Syria, which has led the millions of Syrian and Iraqis to be displaced.

"It may not be too late to salvage the situation. But to do so, we need friends and allies, and the biggest friend and ally in the region that we desperately need is Turkey," Dan Burton, the former Republican member of the House said.

Highlighting Turkey's geo-political advantages as a strong ally for the U.S., "Turkey sits at the crossroads of Europe, the Middle East and Asia. Its proximity to Iraq, Syria, Ukraine, Azerbaijan and Bulgaria — countries engulfed in conflict — make Turkey an ideal location for basing humanitarian relief operations as well as military interdiction operations (if necessary). In fact, Turkey is already engaged in both endeavors with regard to the conflict in Syria," Burton said.

Turkey and the United States have been strong allies in post-World War II era, which the bi-polar world system emerged as part of the rivalry between the communist former Soviet Union and the West. Burton added that Turkey's alignment with the NATO alliance played a pivotal role in containing communism and winning the Cold War against the Soviet Union.

Burton also highlighted Turkey's economic and political performance during the past decade under the AK Party administration.

"Turkey had a remarkable economic performance in the past decade. Turkey's presidency of the G-20 nations in 2015 is a very good example in this context," he said and added, "It has a young, dynamic and educated workforce and is projected by the Organization for Economic Cooperation and Development to have the fastest-growing economy among the OECD members during the periods of 2012-17 and 2018-30."

"Economically, the United States is Turkey's fourth-largest trading partner, and according to U.S. Commerce Department statistics, 65 percent of U.S. businesses doing business in Turkey are eager to invest more money in Turkey. Eighty-eight percent of those businesspeople advocate for U.S. government engagement with Turkey to further improve the investment, market access and operating climate for U.S. companies in Turkey. Turkey's geography location also makes it a key country in U.S. and European efforts to establish new pipelines to tap abundant oil and natural gas resources in Eurasia and the Persian Gulf," Burton said.

The former House member said that Turkey's secular democracy makes it a great example in showing the relationship between stability and democracy for other Muslim-majority governments in the region.

"Turkey's historical, cultural and religious knowledge of and ties with other regional actors make Turkey a natural mediator in an extremely volatile region of the world," he added.
Last Update: Oct 21, 2015 1:21 pm
RELATED TOPICS