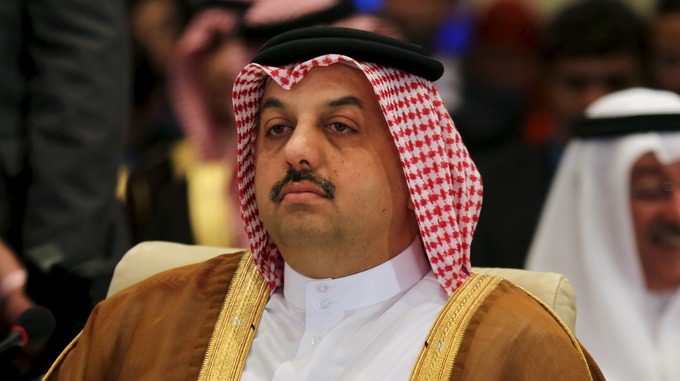 | Reuters photo
by Daily Sabah with Wires Oct 22, 2015 12:00 am
Qatar suggested that it could intervene militarily with the cooperation of Turkey and Saudi Arabia in order to protect Syrian civilians from the Assad regime, the country's Foreign Minister Khalid Al-Attiyah told CNN in an interview on Wednesday.

Stressing that Qatar still prefers a political solution to the crisis, al-Attiyah yet said: "We will not spare any effort to protect the Syrian people and Syria from partition with our Saudi and Turkish brothers, no matter what."

"If a military intervention will protect the Syrian people from the brutality of the regime, we will do it," he added, according to a text in Arabic published by Qatar's state news agency, QNA.

"We do not fear any confrontation, and thus we will call for dialogue from a position of strength because we believe in peace and the shortest path to peace is through direct dialogue," he said.

In response, Syrian Deputy Foreign Minister Faisal Mekdad was quoted by Lebanon-based Al-Mayadeen television as saying: "If Qatar carries out its threat to intervene in Syria, then we will consider this a direct aggression ... Our response will be very harsh."

Since the beginning of the crisis in the war-torn country, Turkey and Qatar have shared the same perspective.

Although Qatar remained silent over the issue, military sources reportedly said in September that Qatari warplanes will be deployed from İncirlik Air Base and participate in the airstrikes against the Islamic State of Iraq and al-Sham (ISIS), adding that it will be decided when the planning stage is concluded.

Qatar is already an active member of the U.S.-led anti-ISIS coalition and currently participating in the train-and-equip program to support moderate Syrian opposition groups. Moreover, Turkey and Qatar, which are close allies, signed a comprehensive military and defense industry agreement last year.

The agreement came into effect in June, and it outlines intelligence sharing between Qatar and Turkey as well as military cooperation and the deployment of forces in each other's territory. Both countries will exchange operational training experiences, cooperate in defense industries and hold joint military exercises.

The agreement also allows Turkey and Qatar the use of each other's ports, airports and airspace. Turkey and Qatar have also agreed to cooperate in fighting terrorism. Therefore, sources indicated that in the case of the deployment of Qatari warplanes, there is no need to sign and ratify a new agreement.