US will not supply arms to YPG ‘as of now,’ senior commander says 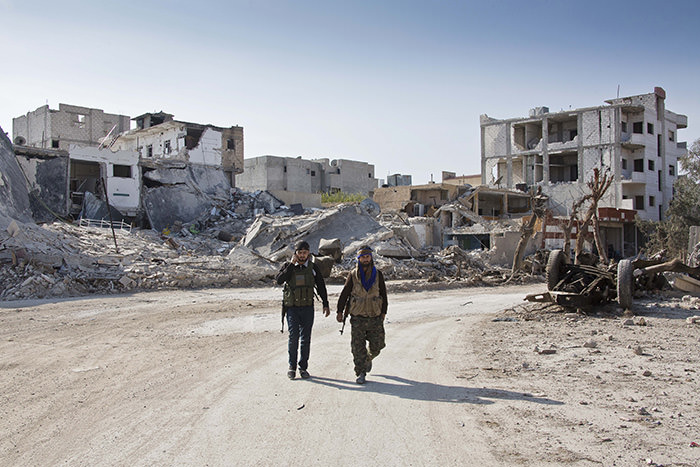 YPG soldiers walk near the town entrance circle heading to their strongholds in Kobani, Syria (AP Photo)
by Daily Sabah Nov 05, 2015 12:00 am
The U.S. will not provide ammunition or equipment to the PKK-affiliated Democratic Union Party's (PYD) armed People's Protection Units (YPG) "as of now," Colonel Steve Warren, a Pentagon spokesman of the U.S.-led coalition for the fight against the Islamic State of Iraq and al-Sham (ISIS), said Thursday via teleconference in a meeting at the Pentagon.

He said: "As of now, we are not providing weapons or ammunition to the YPG. The weapons that we've provided thus far, with the ammunition that we've provided in our one airdrop executed, was for the Syrian-Arab coalition," adding future resupplies by the country will also be for the predominantly Arab Syrian opposition members.

Warren also said they are in very close contact with Ankara, which is a NATO ally and recognizes the PKK as a terrorist organization, along with pledging to address Ankara's concerns regarding its national security interests.

Previously on Oct. 16, Pentagon spokesman Peter Cook said at a press briefing that some ammunition airdropped by the U.S. in Syria last weekend was recovered by the YPG. However, after the briefing he retracted his remarks as the Pentagon tried to clarify Cook's statement, saying that only newly established Syrian Arab forces recovered supplies.

"Sunday's airdrop in northern Syria was intended for and successfully delivered to vetted Syrian Arab forces. We have no indication at this time that any of that equipment was shared with any other groups," according to a note sent to journalists after the briefing.

It was also reported that the PKK wants to use the YPG as a cover for obtaining arms, including Stinger missiles, in clashes with Turkish security forces.

Reportedly on Oct. 14, the intelligence leading Turkish officials to believe that American weapons are in the PKK's hands came from Turkish airstrikes against PKK arms depots in Northern Iraq in the past few months. Special Forces and local intelligence showed that anti-tank mines, rocket launchers, machine guns and anti-aircraft guns given by the U.S. to the PYD were stored in these armories.
Last Update: Nov 05, 2015 9:00 pm
RELATED TOPICS