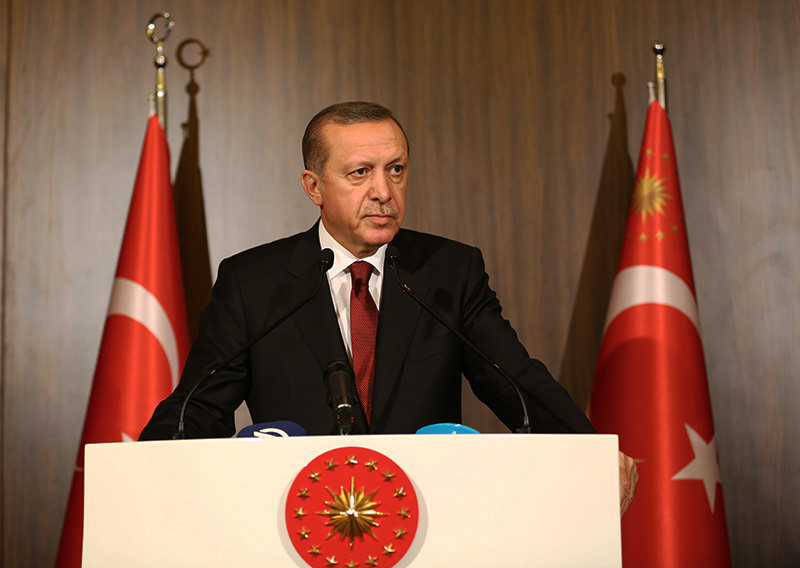 |AA Photo
by daily sabah
Nov 14, 2015 12:00 am
President Recep Tayyip Erdoğan conveyed his condolences to the French nation after the deadly attacks in Paris that killed more than 100 people on Friday night.

"On behalf of the Turkish nation and on my own behalf, I would like to offer my condolences to my counterpart Mr. Hollande and the people of France and I wish a quick recovery to the injured people," Erdoğan said in a statement he gave hours after the attacks took place.

Two presidents also speak on the phone on Saturday in a conversation in which Erdoğan stated his condolences to Hollande and assured Turkey's support to France. Hollande said that he will not be able to participate to the G20 summit to be carried out over the weekend in Turkey's southern province of Antalya, however, foreign and finance ministers will be there to represent France. Two leaders will also come together on November 30 at the UN Climate Change Summit to be held in Paris.

"Turkey knows very well the meaning of terror and its results. We can understand the grief France is suffering now and share the pain of both President Hollande and the French people," Erdoğan said during his address on Friday night.

Erdoğan underlined the importance of adopting a common stance against terrorism in order to prevent the terror attacks and said terrorism has no religion, nationality or country.

He also condemned the attacks and presented his condolences to the French people and President Hollande through a message in French posted on his Twitter account.


Prime Minister Ahmet Davutoğlu also conveyed his condolences to France after the attack.

'The target of this heinous attack in Paris is the whole of humanity and, as Turkey, we vehemently condemn this attack.' Davutoğlu said in a tweet he shared on his official Twitter account.
Last Update: Nov 14, 2015 2:05 pm