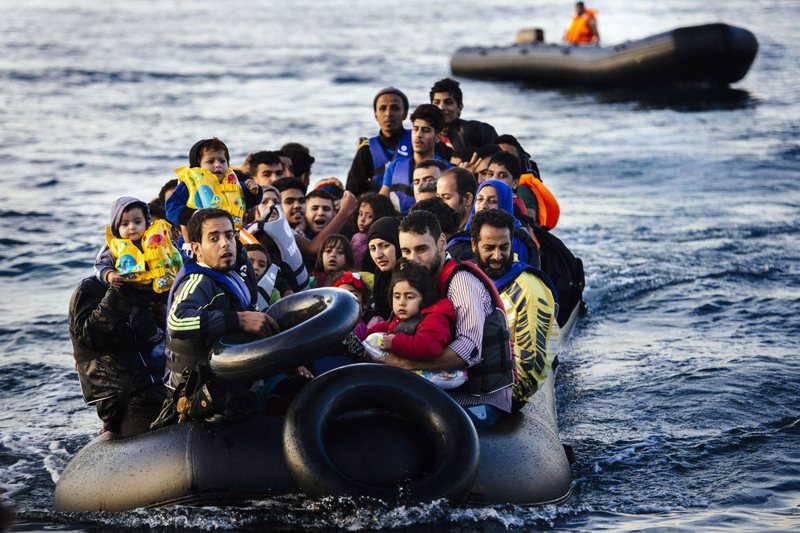 The European Union will hold a special summit with Turkey to secure its cooperation on stemming migration flows. Brussels hopes to reach a deal with Turkey as it fears that ineffective controls border could end up with the collapse of the Schengen system

With the Nov. 1 elections in the rearview mirror as the European Union hoped to see, EU leaders on Thursday reached an agreement to hold an emergency meeting with Ankara as early as the end of November on the worsening refugee crisis to find a way to stem the influx of refugees.

Overwhelmed by the largest refugee crisis since World War II, the European Union was hoping to see a strong single-party government in Turkey, putting all of its plans on hold with Ankara until after the Nov. 1 elections. EU leaders reiterated the importance of Ankara in coping with the crisis and decided to organize a summit that President Recep Tayyip Erdoğan will likely attend. Ankara is now seen as the EU's most vital partner in tackling the refugee issue.

Amid debates about how to ease the worsening crisis, the 28-bloc union is also faced with the possible collapse of its Schengen system that allows EU citizens to travel visa-free within EU borders. EU Council President Donald Tusk argued that saving the system "is a race against time" and added: "Without effective control of our external borders, Schengen will not survive. We must hurry, but without panic."

Meanwhile, Greek Prime Minister Alexis Tsipras has become the most recent EU leader to describe Turkey as "vital." "It is obvious that the only real chance of stopping these flows is reaching an understanding with Turkey," Tsipras said.

Also commenting on the issue, German Chancellor Angela Merkel said: " The EU-Turkey summit would demonstrate that we will work very closely with each other and that we can sensibly share out the challenges arising from the civil war in Syria."

EU Council President Tusk also had his say on a possible Turkish-EU collaboration. "We all agreed that the EU side will do what it takes to achieve this while expecting the Turkish side to play its part," Tusk said.

Tusk, who previously on his official Twitter account criticized those that allegedly used the refugee crisis as a bargaining chip and then called on Turkey to cut the refugee flow if it wanted favors, spoke positively on Thursday of Turkish-EU relations. "We feel confident that a mutually beneficial relationship can be established that will help us confront the present crisis," Tusk said.

At the summit, the two sides are expected to focus on easing the refugee crisis by means of an action plan. A draft action plan was previously introduced in early October, in which the EU intends to mobilize up to 3 billion euros to Turkey in the first place. In exchange, Ankara will pledge to better control its borders and stop refugees from entering the EU zone illegally.

Ankara, however, has had a firm stance on the issue. Prime Minister Ahmet Davutoğlu underlined that "Turkey is not a concentration camp" for those fleeing the war in Syria. Davutoğlu repeatedly stressed that the first topic for Ankara is "the fair share of the refugee burden". He also said that "Turkey cannot deal with the refugee crisis alone," and the EU's offer of 3 billion euros and stepping aside "cannot be accepted."

Davutoğlu also added that visa liberalization for Turkish citizens must be secured for Ankara to agree on a deal with the EU. He further stressed that Turkish-EU relations should "leap forward."

Speaking to Daily Sabah on the issue, a former member of the European Parliament and Daily Sabah columnist Ozan Ceyhun asserted that it is not Turkey but the EU that is in a tight corner, with the refugee crisis worsening day by day. "The EU sealed the deal with African countries thanks to financial aid, but the main problem is the refugees coming from Turkey. The urgent need is to sit at the table with Ankara and settle the issue," Ceyhun said.

Underscoring that EU leaders try to force a summit with Ankara to solve the crisis by negotiating, Ceyhun said: "EU leaders are worried about their own futures in their respective countries. If no agreement is reached between Brussels and Ankara, the situation looks bad for them."

When asked about EU Council President Tusk's contradictory statements, Ceyhun rebuked him saying, "Tusk should not be taken seriously. It is German Chancellor Merkel or French President Hollande who should be the object of this crisis."

Responding to Merkel's statement in which she said the aforementioned financial aid of 3 billion euros will be mobilized not at once but in parts, Ceyhun said: "Reject Syrian refugees and put forth conditions in the way of Ankara, you cannot have it both ways with the new Turkey." Underlining that Turkey is fed up with false pledges, Ceyhun hailed Turkey for hosting more than 2 million refugees for the sake of the EU. He also added that the EU cannot get Ankara to agree on a deal easily after what Turkey has gone through.