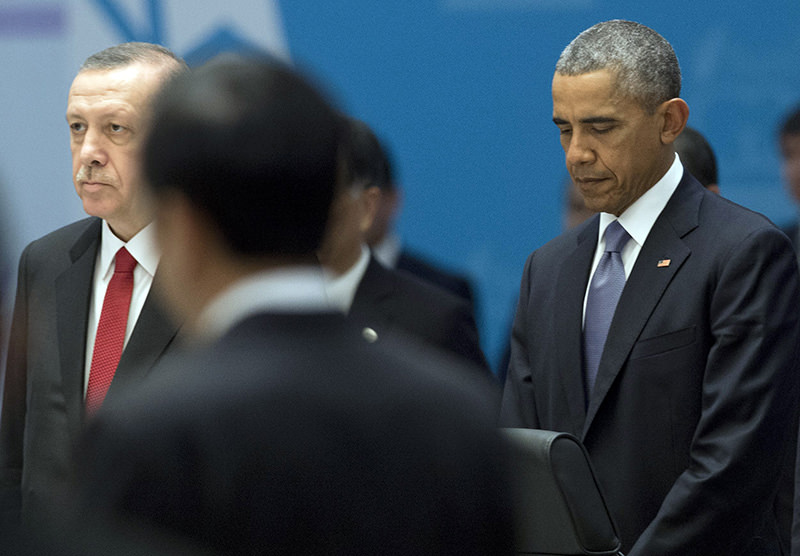 | AFP Photo
by Compiled from Wire Services
Nov 15, 2015 12:00 am
World leaders observed a minute of silence on Sunday to remember the victims of terror attacks in Paris and Ankara at the start of a two-day G20 summit in the Turkish resort of Antalya.

"I am inviting you all to hold a minute of silence for those who lost their lives in terrorist attacks including in particular in Ankara and Paris," President Recep Tayyip Erdoğan said, referring to the October suicide bombings in Ankara that killed 102 and multiple Paris attacks on Friday that claimed 129 lives. 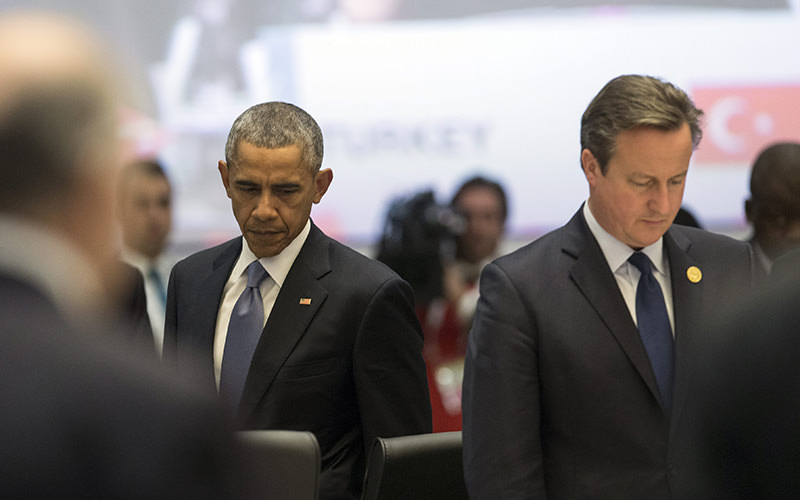 In addition to discussions on the global economy, the G20 grouping of leading nations is set to focus on Syria during its summit this weekend, including the refugee crisis and the threat of terrorism.

World leaders united Sunday to denounce terrorism at the heavily-guarded G20 Summit in Turkey after the gun and bomb assaults in Paris, despite divisions over conflict-riven Syria.

The leaders of the world's 20 most powerful countries have agreed to step up border controls and aviation security in the wake of the Paris attacks that killed 129 people, according to a draft statement seen by Reuters on Sunday.

The heads of the Group of 20 (G20) largest economies, meeting in Turkey, condemned the attacks claimed by ISIS as "heinous" and said they remained united in fighting terrorism, according to the draft document.

Erdğan has said that the terror issue is the most important topic of the G20 Summit. "As France and the world mourn the terrorist slaughter of innocents in Paris, the leaders of the G20 are meeting in Antalya, Turkey. Terror will now vault to the top of the long list of pressing issues that will be discussed," Erdoğan said in his article under the title of "Inclusive Growth and Global Justice", which was published on a website, called 'Project Syndicate' on Nov. 13.

Erdoğan told that the G20, whose members account for about 85% of the world economy, has an important responsibility to respond to challenges that affect the lives and prosperity of millions of people around the world and that it cannot risk falling into complacency and inaction, whether regarding terrorism or the fragile state of the world's economy.

"Since Turkey assumed the presidency of the G20 in December 2014, our approach toward ensuring inclusive and robust growth through collective action has enjoyed the support of the organization's members. This effort has been built on three pillars: decisive implementation of past commitments, boosting investments as a powerful driver of the global economy, and promotion of inclusiveness so that the benefits of growth are shared by all," he added.

Erdogan underlined that when it comes to the implementation, great strides have been made and said: "By promoting sound macroeconomic and fiscal policies and implementing solid, structural reforms, we have made significant progress toward our objective of expanding the G20's collective GDP by 2.1% by 2018. The global financial system is now more resilient than it has ever been. Financial capacities are being rebuilt, and new growth targets are being met."