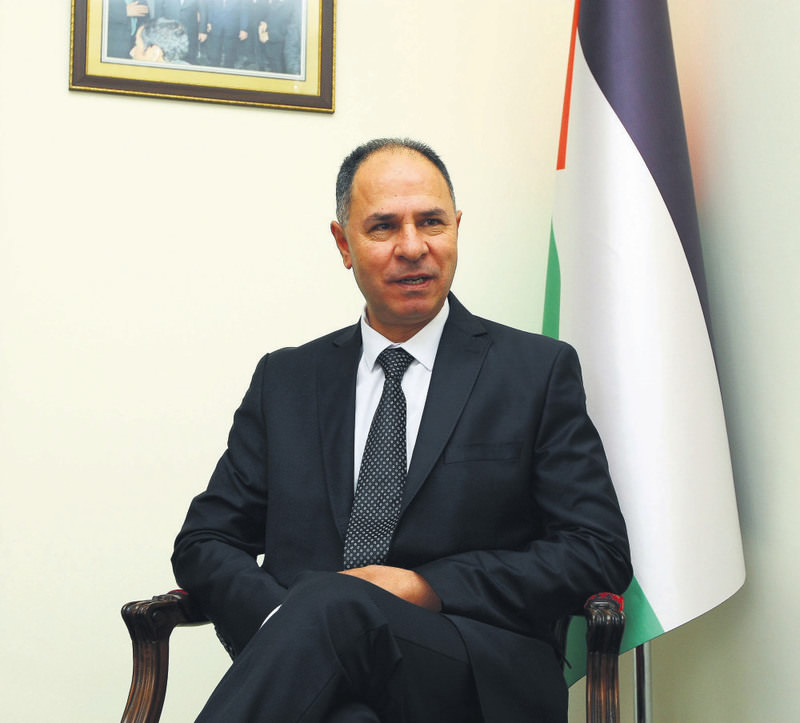 Explaining that Turkey and Palestine cooperate exceptionally well, Palestinian ambassador to Ankara Dr. Faed Mustafa asserted that Turkish-Palestinian relations will not deteriorate should Turkey continue to better its relations with Israel. Mustafa also called on European countries to recognize Palestine and work for a two-state resolution

Palestinian Ambassador to Ankara Dr. Faed Mustafa discussed the bilateral relations between Turkey and Palestine and the exceptional relations between them, especially due to history, in an exclusive interview with Daily Sabah. While Turkish-Israeli relations have been at a political low point since Israel's Mavi Marmara flotilla attack that killed nine Turkish civilians, Mustafa emphasized the strong relations between Turkey and Palestine and said that any improvement in Turkish-Israeli relations will not adversely affect the Palestinian-Turkish relationship. Mustafa further stressed the importance of a two-state solution in the long conflict between Palestine and Israel and urged "European countries to take a brave step as they in principal recognize the two-state resolution and recognize Palestine." Touching on achieving permanent peace in Gaza, he said stability in the Gaza Strip cannot be established without ending the blockade.

DS:In recent days we are seeing that conflicts have intensified because of infringements on Al-Aqsa Mosque. Do you think that precautions such as 24-hour security cameras and the prohibition of Knesset members entering Al-Aqsa Mosque can provide a decrease in tensions and conflicts?

We trust Jordan's sincere intentions in this multilateral agreement reached between the three parties of the U.S., Jordan and Israel, which allows the installation of surveillance cameras inside the Al-Aqsa Mosque Compound for monitoring what is going on inside. We are pretty sure that the Jordanians approved the installation of these cameras to prevent repeated provocations by Israeli extremists and settlers breaking into Al-Aqsa Mosque. But we are also highly concerned that Israel will abuse the use of these cameras to detect every single individual entering or leaving the compound and successively arrest young Palestinian Jerusalemites. We have quite a long history with the Israelis, so we neither trust them nor their promises and pledges, as Israel has never respected or been committed to any of the agreements signed between us since 1993. Israelis declared they will respect the status quo at Al-Aqsa Mosque, but never mentioned or explained what that status quo means; is it the status quo established by the Ottoman Empire and followed by all of the successors, or is it the status quo that Israel invented since the year 2000? Since 2000 Israel has been applying a temporal division of Al-Aqsa Mosque whereby the Israelis barred Muslims from entering it from 7 a.m. to 11 a.m. on a daily basis, to only allow the entrance of Israeli extremists and settlers during these hours. For all that, we continue to suspect Israeli intentions.

DS: In other respects, the increase in conflicts in the last week could cause another intifada. What is your opinion on this?

The continuous provocative Israeli incursions into Al-Aqsa Mosque are not actually the only reason behind the recent actions across the Palestinian territories, there are many other reasons such as the failure to reach a solution through 22 years of negotiations and the failure of the negotiations due to Israeli obstinacy as well as their continuous grave breaches of international law, the continuous illegal constructing of settlements on Palestinian land, especially in Jerusalem and Israeli collective punishment measures applied on all Palestinians in the West Bank and the Gaza Strip. All these factors have made Palestinians lose hope, their hope of any possibility to reach a political solution to end the conflict. In this case, Palestinians will continue their struggle and their right to resist regardless of the definition whether you call it revolution, uprising or any other name.

DS: Do you think that last year's peace settlement for Gaza is over? What is your opinion for permanent peace in Gaza?

It is understandable that the current situation prevailing in Gaza Strip – the unilateral cease-fire after the last Israeli war on the Gaza Strip last summer – is not the outcome of a certain agreement or due to an official treaty, the Israelis avoided reaching any agreement to elude taking their responsibilities against any agreement such as ending the blockade, rebuilding the airport and constructing a seaport. All probabilities to explode the situation all over again with Israel remain as long as Israel continues to tighten its siege by refusing to allow the airport and seaport. How long will this unjust siege last? Stability in the Gaza Strip cannot possibly be achieved without putting an end to this unfair blockade by taking serious measurements to open all crossings to guarantee the free access of goods and to maintain Palestinians natural right of free movement just like the people of any other nation. This of course goes in parallel with a serious compromise process in the West Bank that leads to achieve an independent Palestinian state with East Jerusalem as its capital. Eventually, the West Bank and the Gaza Strip will be parts of one and the same body called Palestine, so nothing would work out alone. We need to reach a comprehensive compromise for both the Gaza Strip and the West Bank.

DS: The tunnels in Gaza are being eradicated by Egyptian President Abdel-Fattah el-Sissi's government. Did this topic become an issue during the meeting between Palestinian President Mahmud Abbas and el-Sissi? How do you evaluate the attitude of the Egypt government?

In their meeting last week in Cairo, Abbas and Sissi tackled the developments and changes taking place in the region, and the escalating precarious situation in Palestine. They reviewed the current political situation and the efforts exerted to put a time frame to end the Israeli occupation and also to provide protection to the Palestinian people in light of the continuous escalation and provocative racial measures from the side of Israel, the occupying power, and the settlers toward Jerusalem and Al-Aqsa Mosque. They also discussed the efforts exerted to help strengthening Palestinian national unity. In addition, they tackled many urgent issues relevant to Jerusalem, settlements, the obstruction of the peace process and dialogue with the Europeans and Americans to follow up on these files and to consult with them on how to proceed on the Arab and international levels. An important issue was raised as well concerning the Gaza Strip blockade and the necessity to open all crossings, especially the Rafah crossing, to ensure free movement for the people in Gaza, the need to reach a compromise that has to do with overseeing the management of the terminal, but Sissi reiterates that the Palestinian government should be the only entity totally responsible for that. Hamas has its own reservations to accept this, but we hope that this will be resolved shortly so that we can go ahead toward a viable operational mechanism.

DS: In recent days Abbas said many participants from the European Union will recognize a Palestinian state. Is there any new progress on that?

Palestinian diplomacy has been always active in this regard and we hold discussions and consultations on all levels with the Europeans all the time. Recognition of the state of Palestine continues to ripen with many European parliaments having voted for its recognition and recommended that their governments do the same, but obviously their governments are still reluctant in this regard. Sweden was the first country to recognize the Palestinian state, and we assume that the recent recognition of the state of Palestine by the Vatican will inspire many other countries to do the same. We urge European countries to take this very same brave step as they in principal recognize the two state resolution, so why not recognizing the second state that they have not recognized yet, which is Palestine.

DS: As you know, there was a meeting between Turkey and Israel for the purpose of normalizing relations. How does Palestine react to progress in this normalization?

We respect the Republic of Turkey and its sovereignty over its territory as much as we highly appreciate its role, so all steps and measures to be taken by Turkey for Turkey's own supreme national interest will be respected, and we are highly confident that any improvement in Turkish-Israeli relations will not adversely affect the exceptional Palestinian-Turkish relationship.

DS: What do you think about the essence of support expected from Turkey for Palestinian action in future?

We have an excellent and genuine relationship with Turkey on both official and people to people levels, and this is clearly reflected in continuous cooperation and political coordination as well as in bilateral and economic relations. We look at Turkey as Palestine's strategic partner in all aspects, we both exist in a region that has plenty of changing and developing matters and we will expand the coordination level between our two countries in order to be able to face all these changes and emerging issues. Turkey has been standing there for our solidarity for quite a long time and we are sure that this will continue to be the same, needless to mention that we are also sure that the huge Turkish humanitarian assistance to the Palestinian people will continue to flow. We have many common stances on Israel's provocative acts in the Al-Aqsa Mosque vicinity, and we consider these actions as playing with fire. For our part, we exert a lot of effort to improve and maintain the distinctive Palestinian-Turkish ties in all aspects.