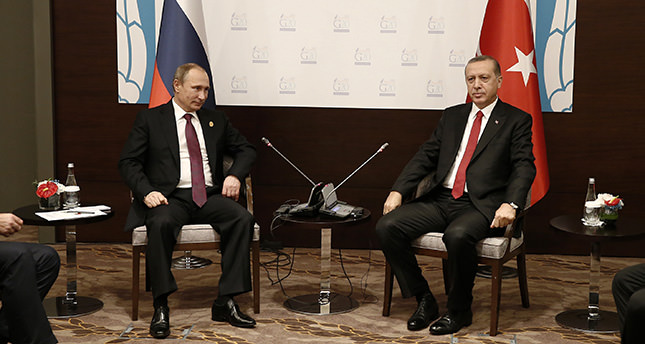 |AA Photo
by Daily Sabah Nov 16, 2015 12:00 am
President Recep Tayyip Erdoğan and Russian President Vladimir Putin discussed the cooperation against terrorism during their bilateral talks held on the sidelines of the G20 Summit in southern Antalya province on late Sunday.

In the meeting, the two presidents reiterated determination to fight against terror. The both parties agreed to hold Turkey-Russia High Level Cooperation Council Meeting in Russia on 15th of December.

Turkey is hosting leaders of 20 major economies in Antalya for the 10th G20 summit, which will discuss the world's biggest political and security crises, including Syria and the mass migration of refugees.
Last Update: Nov 16, 2015 7:57 am
RELATED TOPICS