Slamming the door on refugees would be betrayal to our values: US President Obama 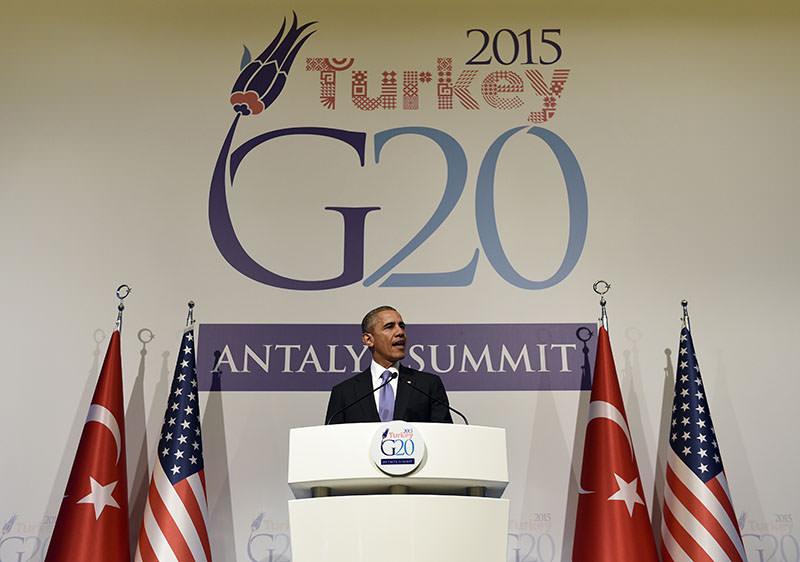 US President Barack Obama speaks during a news conference following the G-20 Summit in Antalya, Turkey, Monday, Nov. 16, 2015. (AP Photo)
by Daily Sabah with Agencies
Nov 16, 2015 12:00 am
Slamming the door on refugees, who flee terrorism themselves, would be betrayal to the western values, said Barack Obama at G20 summit in Turkey.

The U.S. president said that Daesh does not represent Islam and this point was previously emphasized many times by President Erdoğan and Muslim leaders. Obama said, "No nation more than Turkey is carrying the burden of refugees with almost 2.5 million."

Populist leaders around Europe rushed to demand an end to an influx of refugees and migrants from the Middle East and Africa on Saturday after a wave of deadly attacks in Paris claimed by Daesh terrorists.

The carnage in the French capital, directly linked to the conflicts in Syria and Iraq, seemed bound to further complicate the European Union's task in sharing out hundreds of thousands of migrants who have entered the bloc this year, fleeing war and poverty.

Poland's designated Europe minister said Warsaw could not take in refugees under an EU quota system after Friday's wave of attacks on restaurants, a concert hall and a soccer stadium in Paris, in which 127 people died and some 200 were injured.

U.S. President Barack Obama said last week's coordinated attacks in Paris were a setback in the fight against Daesh, but the coalition led by the United States was making progress in bringing down the terrorist group in Syria and Iraq.

"The terrible events in Paris were obviously a terrible and sickening setback. Even as we grieve with our French friends, however, we can't lose sight that there has been progress being made," Obama said at a Group of 20 summit in Turkey.

The coalition is intensifying air strikes and targeting leaders of the group, Obama added.

Obama said that the U.S. rules out putting its troops on the ground to fight Deash terrorists.

Closing two days of talks with world leaders, Obama forcefully dismissed calls from critics including some Republican presidential candidates to send U.S. ground troops into Syria. He said taking that step "would be a mistake" and wouldn't work unless the U.S. was committed to being a permanent occupying force in the region.

Speaking in a measured tone, Obama said the U.S. would intensify its campaign of airstrikes and arming and training moderate forces. And he called on other nations to step up their involvement in the fight against the terrorists.