Cyprus closer than ever to unification, says Turkish Cyprus FM 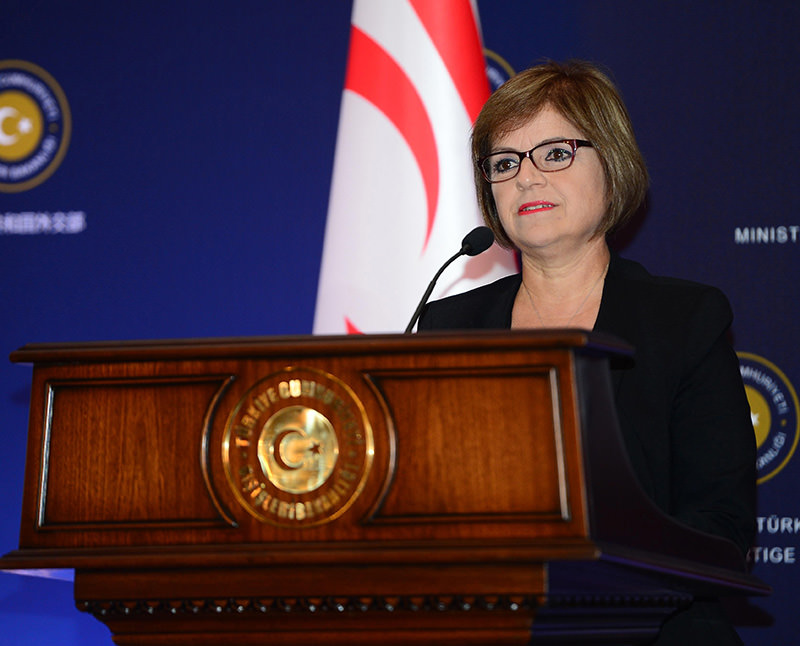 | AA photo
by Daily Sabah with Reuters Nov 18, 2015 12:00 am
Cyprus is closer than ever to ending a four-decade partition with the Turkish and Greek sides potentially agreeing on the text of a deal by May followed by a referendum, the Turkish Cypriot Foreign Minister Emine Çolak said.

"We are cautiously optimistic. We think we are closer than we have ever been before. We don't think the Cyprus problem has got easy - it hasn't but we think we have a window of opportunity. It is possible and it is desirable to get to at least the major part of the negotiations and the agreed text by May 2016," Çolak said.

She added that it would be "a good thing" to postpone Greek Cypriot elections planned for May 2016 to ease the negotiating process. Asked if there could be a referendum on unification in early 2016, Çolak said: "I wouldn't think early 2016 but maybe within 2016 - I don't see any reason why not."

Political tensions on the long-divided island have eased since talks resumed on May 15.

On May 28, leaders agreed on a five-step plan to resolve the Cyprus issue following a meeting hosted by the U.N. special adviser for Cyprus, Espen Barth Eide. These steps included opening more crossing points, interconnecting power grids, allowing cellphone interoperability on both sides of the island, resolving the issue of radio frequency conflicts and forming a joint committee on gender equality.

Peace talks were unilaterally suspended by Greek Cyprus last October after Turkey sent an exploratory ship on behalf of Turkish Cyprus for seismic research off the coast of Greek Cyprus.

Present negotiations would be assisted by an EU technocrat to ensure that any arrangements be in conformity with EU rules and regulations, Turkish Cypriot President Mustafa Akıncı said. Anastasiades declined to specify in what particular areas convergences had started emerging. At present, negotiators appointed by the two sides are looking at governance and property issues and at potential territorial adjustments in a future federated state. "Some progress has been observed on the chapters that are being discussed," he said. The sides will continue to pursue low-level confidence-building measures, but in a manner that would not detract from the key issue of finding a deal.

A "United Cyprus Federation" has been on the agenda of resumed reunification negotiations with the Greek side of the divided island, Akıncı said in July. The guarantor statuses of Turkey, Greece and the United Kingdom have also been left out of the debate so far, Akıncı also stated. According to the negotiated plan, Turkish and Greek states will be founded first for the Cypriot federation, with each having their own citizenship system. The new state will have one lower and one higher parliament, while both Turkish and Greek Cypriots will have the right to reside anywhere on the island.
Last Update: Nov 18, 2015 5:26 pm
RELATED TOPICS