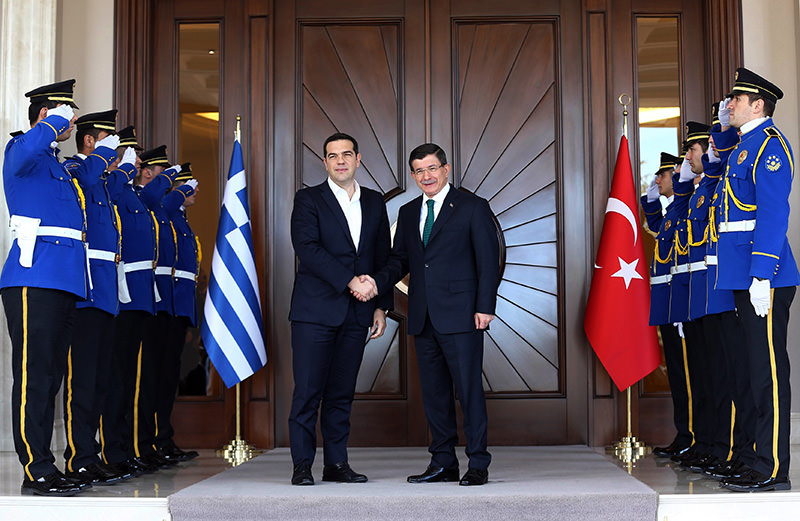 by Daily Sabah with Reuters
Nov 18, 2015 12:00 am
Turkey and Greece have a window of opportunity to act on the unification of Cyprus, Prime Minister Ahmet Davutoğlu said on Wednesday, adding he believed Athens would increase support for Ankara's bid to join the European Union.

"There is a window of opportunity right now over the Cyprus issue. The negotiations are proceeding. We have a common approach with Greece to contribute positively to the talks," Davutoğlu said at a joint press conference with Greek Prime Minister Alexis Tsipras, who is visiting Turkey.

"Turkey, Greece and Europe share a common fate in terms of refugees" the Prime Minister said, while he underscored that the issue was not about refugees, but is rather about Syria and terrorist organizations. He noted that Turkey and Greece are victims of the Syrian Crisis and said that nobody should put the blame on Turkey and Greece alone.

Davutoğlu said that respective Greece and Turkish ministries will create a mechanism to foresee the steps that will be taken to prevent humanitarian tragedies in the future.

Cyprus was divided into a Turkish Cypriot administration in the northern third and a Greek Cypriot one in the southern two-thirds after a 1974 military coup by Greece was followed by a peace mission of Turkey as a guarantor power.

The EU considers the Greek Cypriot government in Nicosia to represent the whole island, while Ankara recognizes the Turkish Republic of Northern Cyprus in the north of the island.