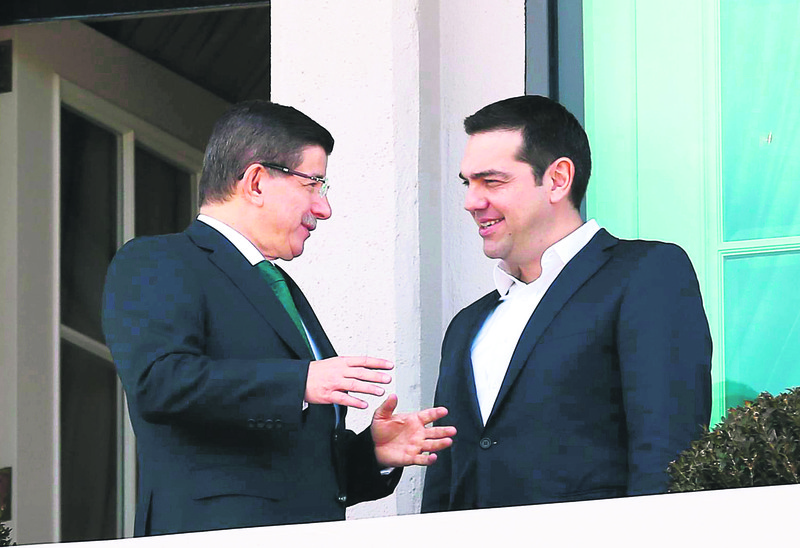 by Merve Aydoğan
Nov 19, 2015 12:00 am
Greek Prime Minister Alexis Tsipras arrived in Turkey on Tuesday and met with Prime Minister Ahmet Davutoğlu on Wednesday in Ankara where the two leaders held a joint press conference. While the ongoing refugee crisis topped the agenda for the meeting, Tsipras and Davutoğlu announced that a joint mechanism like a working group between related ministries of the two countries will be established in efforts to find a solution to the crisis. Tsipras also said that the Greek coast guard commander has also arrived in Ankara to meet with Rear Admiral Hakan Üstem, Turkey's Coast Guard commander, and discussed further measures that could be taken in the Aegean Sea to prevent refugee deaths.

Davutoğlu said that the meeting with Tsipras was very constructive and positive and that they addressed four main topics. Stressing that the refugee crisis is not only a matter for Turkey or Greece, Davutoğlu urged other leaders to cooperate to find a solution to the crisis.

In addition to the refugee crisis, Tsipras reiterated Greece's support for Turkey's European Union accession bid. Regarding Cyprus, Tsipras said that both communities on the divided island must be encouraged toward a resolution. Explaining that both countries have a common approach to the issue and are willing to contribute positively to the talks, Davutoğlu said: "There is a window of opportunity right now on the Cyprus issue. The negotiations are proceeding."Both leaders have urged enhanced integration of their two countries, while possibly establishing a speed-train between Thessaloniki and Istanbul as well as ferries between Thessaloniki and İzmir. Tsipras urged for better confidence building measures from Turkey and added that there is positive news on the mosque to be built in Athens.

Davutoğlu also said that the exploratory talks on the Aegean conflict between Turkey and Greece are nearing a solution and that Turkey wants to gain momentum to find solutions to conflicts between the two countries. Davutoğlu and Tsipras are to meet again in February 2016 in Istanbul for the Strategic Cooperation Council. Tsipras continued his meetings in Ankara by visiting main opposition Republican Peoples Party (CHP) Chairman Kemal Kılıçdaroğlu on Tuesday.

Tsipras paid a visit to Istanbul's Fener Greek Orthodox Patriarchate for the first time as prime minister on Wednesday. The 41-year-old leader met with Patriarch Bartholomew, the Istanbul-based leader of many of the world's Orthodox Christians at the administration building of the Patriarchate in Istanbul's historic Fener neighborhood.

Speaking to the press after the hour-long meeting Bartholomew said that the two discussed the refugee crisis as well as relations with Greece and inter-religious dialogue. "[Tsipras] had visited us three times. We have also met in Athens. We know each other very well. I wish him success in his difficult task," he said.

While the NATO allies have had difficult relations due to disputes over territorial borders in the Aegean Sea and the partition of Cyprus, Tsipras and Davutoğlu have recently started holding regular telephone discussions about issues including migration and Turkey's bid to join the European Union. They last spoke after Turkey's Nov. 1 elections when Tsipras called Davutoğlu to congratulate him on the Justice and Development Party's (AK Party) victory. Tsipras's visit came a day after the G20 Summit that took place on Nov. 15-16 in the Turkish resort city of Antalya where security was increased in the wake of the attacks in Paris that killed at least 129 people and wounded many more.