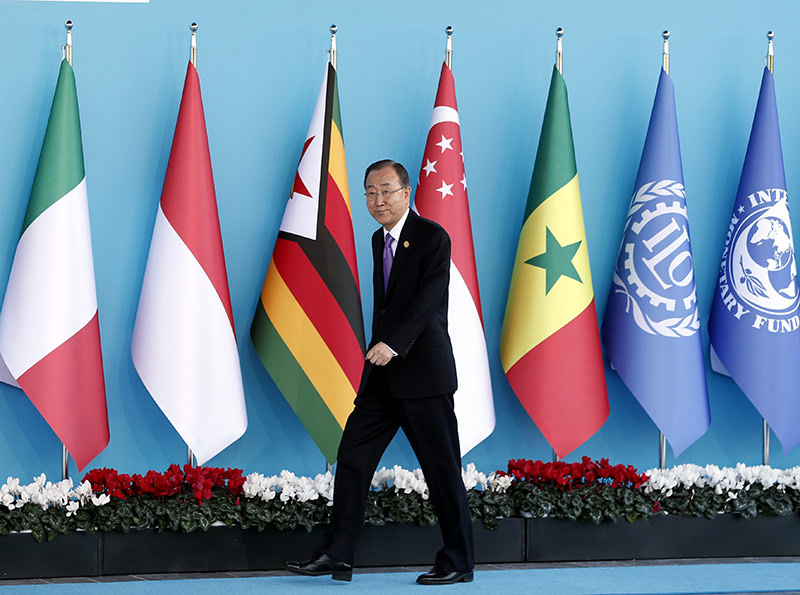 by Daily Sabah with AA Nov 24, 2015 12:00 am
United Nations Secretary General Ban Ki-moon expressed "serious concern" over the incident that resulted in the downing of a Russian jet after it violated Turkish airspace, a UN spokesman said Tuesday.

"[Ban] urges all relevant parties to take urgent measures with a view to de-escalate the tensions. He hopes that a credible and thorough review of the incident will clarify the events and help prevent future recurrences," Stephane Dujarric told reporters in New York.

Dujarric noted that the UN chief repeatedly urged "all those who are engaged in military activities in Syria, especially air campaign, to maximize operational measures to avoid unintended consequences".

He said the incident once again highlighted "the importance of international unity and cooperation in international action against violent extremists in the region, as well as the urgent need to agree to a solution to the tragic events in Syria."

Upon instructions from my Government, I am writing to you with regard to an incident related to the violation of Turkish airspace.

I refer to our previous letters dated 16 October 2015, 18 May 2015, 23 March 2014, 16 September 2013, 12 November 2012 and 24 June 2012 to the Security Council regarding the violation of Turkey's sovereignty, territorial integrity and security. In those letters, we and the determination of the Republic of Turkey to protect its citizens June 26, and reminded the new rules of military engagement concerning Syria, adopted on 2012.

This morning (24 November) 2 SU-24 planes, the nationality of which are unknown have approached Turkish national airspace in Yayladağı / Hatay region. The planes in question have been warned 10 times during a period of 5 minutes via "Emergency channel" and asked to change their headings south immediately.

Disregarding these warnings, both planes, at an altitude of 19.000 feet, violated Turkish national airspace to a depth of 136 miles and 1.15 miles in length for 17 seconds from 9.24 05" local time.

A Russian SU-24 warplane was shot down while in Turkish airspace earlier Tuesday after repeatedly ignoring warnings that it was breaching the territory.

Russia began airstrikes in Syria on Sept. 30 to prop up the regime of Syrian President Bashar al-Assad in a civil war that has killed more than 250,000 victims.

Russian jets previously violated Turkish airspace twice in October. The incidents occurred within a few days of the start of Russia's air campaign.