Nationality of jet was unknown before downed: Turkish military 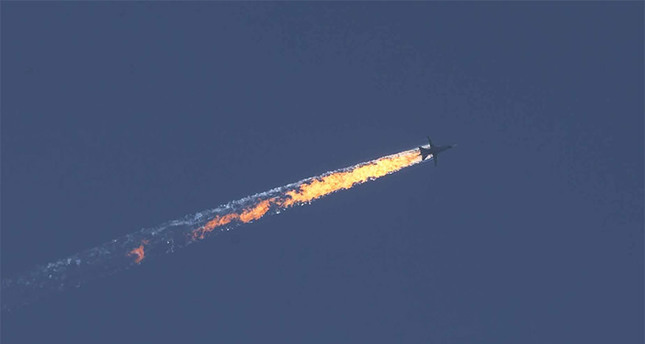 by Daily Sabah Nov 25, 2015 12:00 am
Turkish Armed Forces released a statement on Wednesday regarding the downing of the Russian SU-24 by Turkish jets. In the statement, the military said that the nationality of the Russian warplane was unknown while it was being warned repeatedly by the Turkish pilots.

"Regarding the downing of the SU-24 jet that belongs to the Russian Federation, Russian Military Attaché and Army Attaché have been invited to the Headquarters of the General Staff and the officials have been informed about the incident," the military said in the statement.

Adding that the nationality of the warplane was unknown while it was warned, Turkish Armed Forces said that the SU-24 was downed in compliance with the rules of engagement as it did not respond to continuous warnings.

"Republic of Turkey and Turkish Armed Forces have put strong efforts into the search and rescue operations for the Russian pilots. Every question was answered regarding the incident and path analysis maps were shown to Russian officials for a better explanation. The Turkish military also reiterated its willingness to share any sort of information that may be related to the incident," the statement said, further adding that Turkey had before informed Russia about its commitment to protect its airspace and urged the country to respect the rules of engagement.

"Russian officials were reminded of the fact that any warplane of unknown nationality is subject to the rules of engagement upon approaching the Turkish airspace," the military added.

"In addition, military officials in Moscow have been contacted by telephone and informed about the fact that Turkish Armed Forces is ready for any sort of cooperation with the Russian Federation," the statement concluded.
Last Update: Nov 26, 2015 2:20 pm
RELATED TOPICS