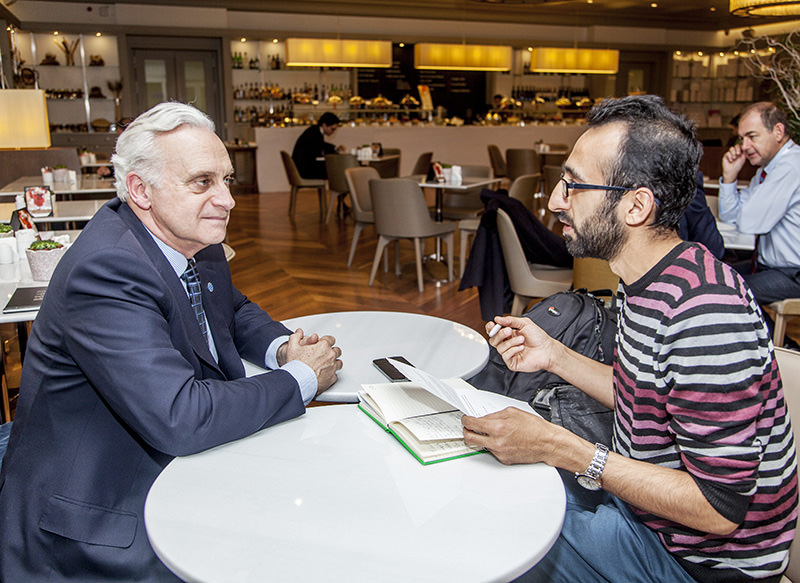 by Mehmet Solmaz Nov 25, 2015 12:00 am
Commenting on the Turkish Air Force downing a Russian warplane near the Syrian border after it violated Turkish airspace, former U.S. Ambassador to Ankara Francis Ricciardone told Daily Sabah that Russia, unlike Turkey, has not made its intentions in the Syrian crisis explicitly clear.

The Russian fighter jet was downed near the Turkmen-populated region of Latakia, where there is no DAESH presence. Ricciardone said Russian aircraft were "evidently" flying far from any route that would be necessary to support multinational efforts against DAESH.

Daily Sabah: How do you interpret NATO member Turkey's airspace being violated by a Russian fighter jet that was a region where there is no DAESH presence?

Francis R Ricciardone: At least three years ago and since then, Turkey has repeatedly made clear its rules of engagement with respect to its airspace on the Syrian border. The Syrian regime and Russia have violated Turkish airspace several times. In each incident, Turkey has issued warnings directly to the foreign pilots involved, and subsequently in public and through official channels to the countries involved. In those cases when Turkey has fired on the intruding aircraft, it evidently did so only after they failed to respond to the warnings.

Only the Russian side can explain their intended targets and why they were in or even close to Turkish airspace. It will be interesting to see whether they offer any public statements as to why their aircraft were flying in that region, evidently far from any route that would be necessary to support multinational efforts against DAESH.

DS: What does Russia actually want at a time when the two sides came together in Vienna to find a solution to the chaos in Syria? Could Russia's move be interpreted as a threat to the region?

FR: You raise this question because in this incident as in others recently, Russia, unlike Turkey, has not made its intentions explicitly clear. Turkey has clearly and emphatically stated its intentions and purposes over the past several years with respect to protecting its airspace along the Syrian border, and again following recent incidents. I would not presume to speak for Russian intentions. If Russia does not clarify its intentions publicly and credibly, it will be important nonetheless for Moscow and Ankara to communicate clearly with each other through their bilateral diplomatic channels. The same is also true if Russia wishes to play an influential role in multilateral diplomacy with respect to Syria, as at Vienna.

3) What will NATO's response be to the incident in terms of Turkey's security? Will the incident have an impact on the security of energy transfer into Turkey?

FR: This incident demonstrates the continued importance of the NATO alliance for all its members and Turkey's ever-important role as NATO's southeastern flank. There can be no question of NATO's solidarity with Turkey in this matter.

As for Turkey, Russia, and the global energy transits, Turkey's geography dictates that it will remain pivotally important as a global energy transit route from north to south t, and from east to west. Turkey depends on Russia for a large proportion of its gas supplies, but in return, Russia depends on Turkey as an important export route for its gas. Moreover, Russia has a strong stake in exporting its nuclear energy technology, and Turkey is a prime customer. So, it seems to me both countries have a certain interdependency on energy issues. This can be a healthy and stabilizing factor, provided Turkey continues to seek to diversify its energy partnerships.